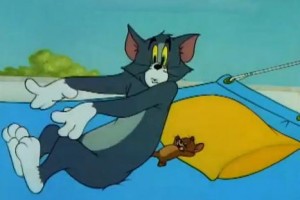 There is just something simple and timeless about watching a short from Tom and Jerry. I grew up watching them and now approaching 30 years old, I am still extremely entertained watching them battle each other . This DVD includes over twenty exciting shorts which not only feature Tom and Jerry but also their dog counterpart Spike. Since this is called “In the Doghouse” a lot of shorts feature around the three of them. I say one thing to Warner Brothers…keep these coming!! Can’t wait for “Tom and Jerry: Around the World” on May 1, 2012.

These shorts are fun for the whole family guaranteed. I did really enjoy the focus of this set with Spike and his son Tyke. I have always enjoyed his voice, especially since our stars Tm and Jerry remain silent (of course besides when singing). In this release their are classic episodes like “Cat Fishin'” and ” and “The Framed Cat”, as well as newer shorts like “24 Karat Kat” and “The Dog House”. Either way you look at it this is a winning collection.

Tom and Jerry: In the Dog House available on DVD 3/6 /zxsVYq” 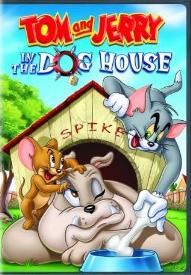 Tom and Jerry are at it again! But there’s a new ingredient to their classic chase recipe — just add Spike! It’s hound heaven as everyone’s favorite bulldog, Spike (and son, Tyke) get in on the fun in this pup-packed collection. These 22 doggie-delightful shorts are guaranteed to have fans howling! Join Spike and Tyke in their many dealings with the fast and furious duo. Whether he’s on guard duty, or simply trying to catch a nap, you can bet that Tom & Jerry’s fur-fueled antics are guaranteed to rattle Spike’s cage. And an angry Spike usually spells hard times for Tom — with a little coaxing from Jerry, of course! Leash-up for some K9-filled fun for the entire family!