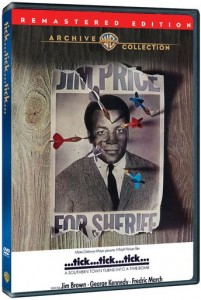 Jim Brown is always known for being bad ass, this film just continues to prove it. I came into this career late experiencing “Original Gangstas” first, even then he was still awesome. This film focuses on a small town with a black sheriff that is taking over. Of course the racist town does not like the idea and set out to cause issues. Jim Brown is perfect for this role and really kick some major ass. Fans of “Naked Gun”, should enjoy this film for a truly amazing performance from George Kennedy. He is one tough son-bitch in this movie and joins up with Brown’s character to help keep the town in order.

I have no idea how this film is rated G because it deals with some real tough issues like rape and murder but it is not called “Tick…Tick…Tick…” for no reason.  Once this film gets started it is a slow burn to the amazing conclusion. WB Archive is known best for their remastering of classics and releasing them on DVD. This film is not different and looks great on DVD. It also includes a great widescreen transfer 16×9 2.40:1 of the film. The audio is also very sharp and clear. Like all releases though from Warner Archive, there are no special features. But since this film is not currently available on DVD at all this is a real treat on its own. If you are fan of Jim Brown, this is a must purchase for sure. You can only get for the WBShop, here.

Synopsis: Ralph Nelson, director of Lilies of the Field, returns to the subject of race relations in America for a thoroughly different take in Tick…Tick…Tick…. Tensions are taken off the back-burner slow simmer and are placed on full boil in Tick…Tick…Tick…’s tale of a black Southern sheriff trapped between the rock and a hard place of two communities separated by skin color and decades of bigotry. Newly elected, Sheriff Jimmy Price (Jim Brown) offers no favors or privileges to either community, and quickly earns the ire of both. Warned by the mayor against consulting outsiders (the great Fredric March in his penultimate film performance), Price navigates the tensions until one arrest places him directly in the eye of a hurricane of hate. With only the former sheriff to support him (George Kennedy) Price must try to defuse the tensions before the town explodes.