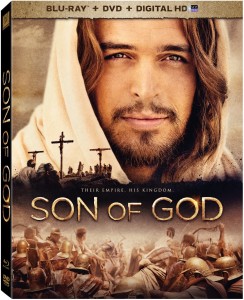 I was brought up in a catholic household growing up and I was an alter boy for many years. Having attended catholic school or many years, I am quite aware of The Bible and it’s stories. In case you are not aware “Son of God” contains re-edited scenes from ten-hour miniseries “The Bible”, which aired in March 2013 on the History Channel. There are some new scenes in this movie, but the majority has already been show on TV. I know that producers (and also husband and wife) Mark Burnett and Roma Downey probably saw dollars signs when this show was such a big hit on TV and thought how can they make more. Isn’t greed one of the seven deadly sins 😉 Either way, I don’t blame them I just wasn’t really absorbed by the almost forced faith that was being delivered in this film. But this is just my opinions, I have heard from many people that this quite amazing and inspiring but I guess I just didn’t drink that cool aid.

Official Premise: Now, the larger-than-life story of The New Testament gets a larger-than life treatment in the stand-alone feature SON OF GOD. Told with the scope and scale of an action epic, the film features powerful performances, exotic locales, dazzling visual effects and a rich orchestral score from Oscar-winner Hans Zimmer. Portuguese actor Diogo Morgado portrays Jesus as the film spans from his humble birth through his teachings, crucifixion and ultimate resurrection. It marks the first motion picture about Jesus’ life since Passion of the Christ, released ten years ago.

20th Century Fox Told releases this film on Blu-ray as a combo pack also including a DVD and digital copy of the film. The 1080p transfer does succeed in given this film the scope and scale of an action epic film. The exotic locations and visual effects are well represented as well. The DTS-HD Mater Audio 5.1 track works well with the rich orchestral score. In terms of special features, there more faith filled goodies. Firstly there is also a Spanish version of the film included since I guess there was a big demand for that. There are two featurettes “Son of God: Reborn” and a behind-the-scenes look into the making of the film with”From The Set: The Passion”. Lastly, thereis “Faith Into Practice”, which focuses on introducing children to a relationship with Jesus Christ, which is actually quite decent (especially having a two year old myself).