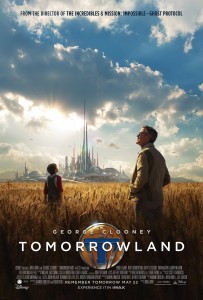 I have very fond memories of Tomorrowland. I’m referring to the section of Disney World where everyday people like you and I can wander and be amazed. A few years ago I stumbled into a theatre there and, somehow, my likeness was projected as “Sully” when they told the story of “Monster’s Inc.” Afterwards, as we left the theatre, more than one child pointed at me and said “bye, Sully.” That was Tomorrowland then. But what about “Tomorrowland” now?

We find ourselves at the 1964 World’s Fair. Here, while many new marvels are being unveiled (among them, the Ford Mustang, color television and, since this IS a Disney film, the “It’s A Small World” ride) we meet young Frank Walker (Thomas Robinson). Frank has shown up to enter his invention in a contest in the hopes of winning $50.00. He is met by Nix (Laurie), who questions his invention and its usefulness. Frank also meets Athena (Cassidy), a young girl who is smitten with the young man. Ah, young love.

Fast forward 50 years and meet Casey Newton (Britt Robertson). Her scientist father (Tim McGraw) is in the final weeks of his job with NASA. Hoping to keep dad working a little longer, Casey tries to disrupt the work that is leading to dad’s dismissal. Arrested she is sent to the local pokey. When she makes bail she gathers her belongings and finds, among them, a mysterious pin. When she touches it she flashes to another place. Another time. Tomorrowland (bum, bum, bum)!

Beautifully filmed and full of amazing effects, “Tomorrowland” is a film with a message. What’s bad about it is that it takes more than half the film to actually get TO that message. Basically, the film is the story of two people with different ideas about the future. One (Frank) is sure it’s doomed while the other (Casey) has that optimistic outlook that one normally finds in kids who still believe in Santa and the Tooth Fairy. Not only is Frank down on the future, his heart is broken because young Miss Athena did not return his feelings. Or should I say she couldn’t. Let’s just say that a lot of things were being built in 1964.

One of the drawbacks to the film is the length. Director Bird seems so intent on dazzling the audience that he seems to have lost his watch. A side-trip to a fandom-themed store is fun (stock full of “Iron Giant” toys and many reminders that Disney will be releasing the next “Star Wars” film this Christmas) but, like other set pieces, goes on forever. If not for the work of the actors, who seem to be buying the premise, the film could have been one big commercial. Clooney is subdued while Robertson is hyper. The best performance in the film belongs to Miss Cassidy, who brings true emotion to a character that shouldn’t have any. The PG rating my bring the kids but I think both they, and their parents, may keep checking their watches in-between the on-screen fun.