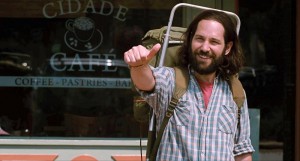 When I first saw a trailer for this film in theaters, I couldn’t have wanted to stay away more. Bad trailers though do not always mean bad movies. This little gem got overlooked actually deserves some attention. Paul Rudd in my eyes had been on a downward spiral with the films he has chosen to be in. Romantic comedies and just lazy films, he is very funny and this film challenges him quite a bit. The film is funny but it is not a full blown comedy…it is dramatic but is not a drama. I like the mix of both and it works well with the story as well.

We follow Ned (Rudd), who is one of the nicest guys in the world, gets busted selling weed to a cop. Upon getting out of prison, he finds out that he lost his home and his girlfriend and decides to move in with this family. Well, his family consists of his mom and three sisters played by Elizabeth Banks, Zooey Deschanel and Emily Mortimer. Ned ends up living with each sister and turns their lives upside down or does he end up shedding light to help each of them?

Besides Rudd performance, which I really enjoyed, the supporting cast is also very notable. Elizabeth Banks, Zooey Deschanel, Emily Mortimer play the sisters to Ned and they all really give totally diverse and entertainment performances. Adam Scott, Steve Coogan, and Rashida Jones also appear but have smaller roles but only add greatness to this already stellar cast.

The bonus features on the Blu-ray are basic. The audio commentary includes is with director Jesse Peretz. He gives a real good insight into the making of the film. There are four deleted & extended scenes, including an alternate ending. They are only in SD which is interesting but they are worth a watch. “The Making of Our Idiot Brother” is also in SD but delves into the film and runs a decent 15 minutes.