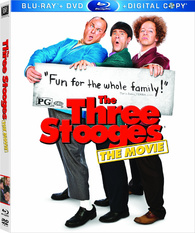 The Farrelly Brothers are believed to be directors that really known comedy, especially since they created the classic “There’s Something About Mary”. Though honestly their last three films haven’t really impressed me at all. “Stuck on You” was lame. “Hall Pass” was a one joke movie. “The Three Stooges” could have been amazing when Jim Care, Benecio del Toro and Sean Penn were attached but they went the cheap route with it and got a lesser cast attached just for the sake of getting it made. Overall it does get a few laughs and it gives props to the classic humor of the original Three Stooges.  It even used some of the sounds from the original shorts but then they had to throw in the “Jersey Shore” cast, which was the last straw for me. Let’s just saw the film is far from poifect!

“The Three Stooges” follow Moe, Larry and Curly as they head out on a mission to save an Orphanage. Their back story is that they were left on a doorstep of that same Orphanage and raised by the nuns.  When the trio find out that the Orphanage is being forced to close its doors, they find a way to save it.  Of course it’s not that simple and hilarity, mischief and mayhem ensues.

The Blu-ray presentation unlike the film is pretty good.  The 1080p transfer looks sharp. The DTS-HD Master Audio 5.1 surround track sounds good and works well with the Stooges’ finger-poking, nyuk-nyuking and woo-woo-wooing.  The release itself comes in a combo pack with a Blu-ray, a DVD disc and a digital copy of the film. Hardcore fans of the Stooges, should stay away from this film but new fans or causal fans of the comedy trio should get a laugh or two.

The special features on this release are decent but not amazing.  There are about ten minutes of deleted/extended scenes.  They seemed to fit well with the film and could have been really used.  “What’s the Big Idea? A History of The Three Stooges” feature the Farrelly Bros chatting about why they made the film. “Knuckleheads: Behind the Scenes of The Three Stooges” is a very short behind the scenes featurette on the production. “Did You Hear That? The Three Stooges Sound Effects” is a cool feature about how they used some original sounds from the early shorts. “Poifect! Casting The Three Stooges” talks with the three leads.  “The Three Stooges Mash-Up” is a montage of slapstick scenes, I enjoyed this a bit. “Original Screen Test” is the footage used to cast the films leads. Lastly there is a theatrical trailer included.

One Reply to “Blu-ray Review “The Three Stooges: The Movie””