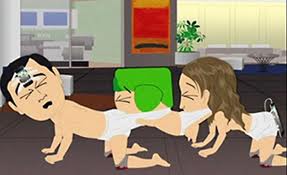 I remember watching the very first night that “South Park” premiered on Comedy Central. I wouldn’t say that I am huge fan of the show, since I stopped watching around 2000. Now I have seen a dew episodes here and there in the last 12 years but I would have never thought that this show would reach its 15th season. It is such an unbelievable success and they show is still relevant and funny. I do feel that it does a little over the top and too far on some occasions but that is the beauty of the show. Since reviewing this, I have found a few love in this show and I have started watching “South Park” again, which just returned for its 16th season this month.

This Blu-ray contains the complete fourteen episodes from this season and are completely uncensored as well, which is a plus. “HumancentiPad” is a take on The Human Centipede and features Kyle who is involved in the development a revolutionary product. “Funnybot” is where Jimmy hosts the Special Ed Department’s First Annual Comedy Awards. “Royal Pudding” focuses on Ike’s is obsessed with the Royal Wedding.In “T.M.I.”, Cartman goes into anger management therapy after their penis sizes are posted on the school bulletin board. In “Crack Baby Athletic Association”, Kyle gets involved with Cartman’s latest business venture. “City Sushi” features when Butters is diagnosed with multiple personality disorder. “You’re Getting Old” follows after Stan’s 10th birthday, his worldview starts to change and so do his friendships. In “Ass Burgers”, Cartman finds a unique way to cope with Asperger’s Syndrome. In “The Last of the Meheecans”, Cartman joins the U.S. Border Patrol. “Bass to Mouth” focuses a gossip site that leaks the kids’ most scandalous secrets. “Broadway Bro Down” follows Randy as he becomes Broadway’s biggest fan. “1%” features The 99% is ganging up on Eric Cartman. The boys try to discover the truth about the first Thanksgiving in “A History Channel Thanksgiving”. Kenny ends up in the foster care system after his parents are arrested in “The Poor Kid” 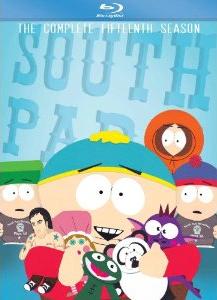 When it comes to special features this Blu-ray is not lacking in that department at all. It comes with an amazing documentary called “6 Days to Air: The Making of South Park”. It gives the first-ever look behind-the-scenes at South Park Studios and an in-depth looking to creating an episode. The next extra “6 Days to Air: Behind the Scenes of ‘City Sushi'” is similar to the first feature but focuses on the one specific episode. There are also about five minutes of deleted scenes from the season, nothing amazing but worth checking out. Lastly, the best feature is mini-commentaries by creators Trey Parker and Matt Stone on each episode. They each run about 5 minutes and are a lot of fun.