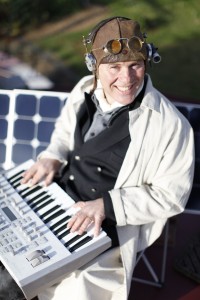 October shows in seven U.S. cities include appearance at L.A.’s

These solo performances will take the form of a 60-minute lecture about his new social networking transmedia game, The Floating City, interspersed with live songs from his upcoming album (A Map of the Floating City, due out October 25 on Lost Toy People Records through Redeye Distribution), as well as a few timeless classics.

The trip will take the artist from coast to coast, with live appearances in Washington D.C., New York, Chicago, Seattle, Portland, San Francisco and Los Angeles. Most are club venues, though some live radio and TV shows are included. A list of cities and venues appears below.

At each show, Dolby will tell the story behind the recording of the new album on his solar-powered lifeboat, with an impressive array of guests including Mark Knopfler, Imogen Heap and Regina Spektor. He will also give his personal account of the groundbreaking Floating City game, which he describes as “a Dieselpunk dystopia . . . weary survivors of a global climate catastrophe bartering and trading to stay alive in the face of techno-piracy and mutant squid attacks!”

More than five thousand players played the online game, forming into nine “tribes” and competing for the grand prize — a free private concert by Dolby and his band from his new album.

Along the way they explored a fictional world based on characters and places in Thomas’ lyrics going all the way back to 1980; and discovered downloadable MP3 files of his songs, including sneak previews of works from his upcoming album.

Dolby will retell the player-created stories that unfolded during the 12 weeks of gameplay, highlighting key characters’ profiles, and the “patent applications” they filed to protect themselves against the unpredictable freak events reported by The Floating City Gazette. And he’ll share behind-the-scenes insights into the production process, which took place over the course of an eight-month period using a team of developers in different time zones who never met face to face.

November will see a full live concert tour of the U.K. by Thomas and his band, and a theater/performing arts center tour of the USA will follow in early 2012, along with selected festival dates later in the year.

Prior to The Floating City game and the new album A Map of the Floating City, Dolby is known for his hits “She Blinded Me with Science,” “Hyperactive,” “Europa” and “Airhead.” He also wrote Lene Lovich’s “New Toy” and Whodini’s “Magic Wand.” He is presently musical director of the TED Conference.

THE FLOATING CITY: A Dieselpunk Dystopia