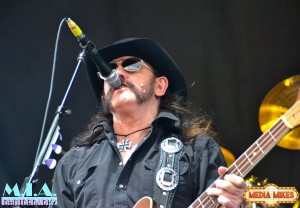 It’s is with great sadness that Media Mikes reports the passing of a true Rock/Heavy metal icon. Ian “Lemmy” Kilmister passed away on December 28th at the age of 70. Lemmy was the in your face front man of the heavy metal band Motorhead which Kilmister formed in 1975. The group went on to release twenty two studio album as well as several live albums. The group is probably best known for their 1980 album release “Ace of Spades” which spawned the bands signature song of the same name. Lemmy worked with countless other acts and artists including Wendy O. Williams and Dave Grohl. He also appeared in a number of television shows and films including the 1995 comedy “Airheads” staring Brendan Fraser, Adam Sandler and Steve Buscemi. A statement on the bands Facebook page read:

“There is no easy way to say this…our mighty, noble friend Lemmy passed away today after a short battle with an extremely aggressive cancer. He had learnt of the disease on December 26th, and was at home, sitting in front of his favorite video game from The Rainbow which had recently made its way down the street, with his family.”

“We cannot begin to express our shock and sadness, there aren’t words.”

“Celebrate the LIFE this lovely, wonderful man celebrated so vibrantly himself.”

“HE WOULD WANT EXACTLY THAT.”

Born to lose, lived to win.

The Media Mikes crew would like send our heartfelt condolences to all the friends, family and band members of Lemmy. He will truly be missed.