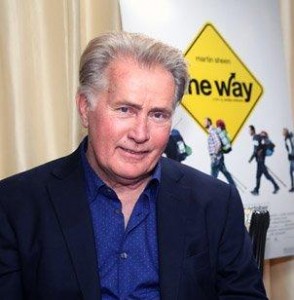 Years from now, should an alien species find a time capsule of America, they may think that Martin Sheen was one of our greatest presidents.  He’s played practically every member of the Kennedy family except Jackie, narrated the film “JFK” and earned numerous Emmy and Golden Globe award nominations (he won the Golden Globe in 2001) for his role as President Jed Bartlet in “The West Wing.”

Born Ramon Antonio Gerard Estevez (he changed his name to Martin Sheen to avoid being typecast as a Hispanic actor), Sheen began his acting career with appearances on such 1960s television programs as “Route 66,” “The Naked City” and “The Outer Limits.”  In 1968 he earned a Golden Globe nomination for his supporting role in the film “The Subject Was Roses.”  He continued to work steadily for the next decade, scoring acclaim for his work in such films as Terrence Malick’s “Badlands” and the television film “The Execution of Private Slovick.”  In 1979 he starred as Captain Willard in Francis Ford Coppola’s epic “Apocalypse Now.”  The shoot was so intense that Sheen suffered a heart attack during production.  The heart attack was serious and almost threatened to shut down the film.  In the documentary “Hearts of Darkness” director Coppola is overheard on the phone speaking to a studio executive – If Marty dies, I wanna hear that everything’s okay, until I say, “Marty is dead.”

In the three decades since “Apocalypse Now” Sheen has starred in such projects as “Gandhi,” “The Dead Zone,” “Wall Street,” “Cadence” (which he also directed), “Catch Me If You Can,” “The Departed”  and, of course, “The West Wing.”  He is also an award winning director, winning an Emmy for his work on the CBS Schoolbreak Special entitled “Babies Having Babies.”

Before I begin my questioning I offer Mr. Sheen my thanks for a kind gesture he 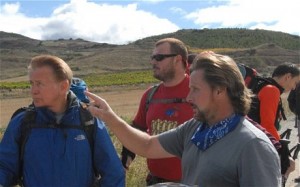 made several years ago.  While helping with a charity event I contacted several celebrities asking for an autographed photo to be used as silent auction items.  Mr. Sheen not only provided a photo for the auction, he also included one personalized to me, which now sits on my desk.  As Mr. Sheen began answering my first question I noticed that my recorder was on “pause.”  Embarrassed,  I had to interrupt him and ask him if he would please start over.  He reached out and jokingly “choked” me with a hearty laugh.

Mike Smith:  What drew you to this project?
Martin Sheen:  My grandson, Taylor, and I were in Spain in 2003.  He was my assistant on “The West Wing” and we were between seasons.  We had tried to figure out how he and I could do the Camino in two weeks and realized it just wasn’t possible.  Not only did we not have the equipment, we didn’t have the time and we didn’t have the experience.  So I rented a car and we drove it.  And we got to Burgos.  We stayed there and at dinner the family that was serving us had a young daughter.  She and Taylor looked at each other and they’ve been together ever since.  They’re married now and they live in Burgos.  So that was the first “miracle” on the Camino.  And it sealed it in our family forever.  So I came home and I tried to encourage Emilio to think about doing something on the Camino.  It was such a fascinating place and no one had ever done a movie about it.  There had been documentaries and such but no one had ever done a feature.  He had started going over to Spain to see his son because that was the only way he could see him.  And he became enamored of it.  He started talking to pilgrims and started walking the way.  He began investigating and writing scenarios.  And finally he came upon a father/son story.  But he needed a hook to get the father to the Camino and that 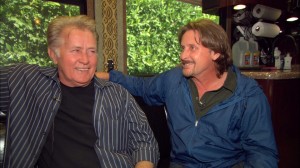 would be the death of the son on the Camino.  And that was the scenario.

MS:  Actors are always looking for motivation.  And I actually had this thought back when you and Charlie were in “Wall Street.”  With Emilio, your son, playing your on screen son, is that an extra motivation…do you use that emotion as an actor?
Martin Sheen:  Inside each actor is a store of emotional wealth.  Of spiritual wealth.  We all carry a lot of emotional and spiritual stuff in our being.  And we go to that well when that motivation is necessary to play a certain character.  That’s called sense memory.  Every actor does that.  The audience may never know what it is.  But I go there and the audience thinks this character is going through this pain, but that is just one of the things that we are given to do.  It’s like you’re given a license.  “You can go there, mister, but you must do it in a proper way.”  In a film, a television show, a play.  But you can’t do it in a bar or on the street or you’ll end up in jail.  You’ll end up in the home!  It’s something very specific but all artists have it.  Writers have it.  Musician’s have it.  All people in the arts have it.  It’s personal.  It’s your well of spirituality – suffering, pain, loss- all things that belong to you.  You have your store of your history and I have mine.  So we go there on these occasions when necessary.

MS:  In reading interviews with you in the past I know you’ve been asked this same question but I want to ask it another way (note:  that question is “how does it feel to be directed by your son).  You’ve worked with some great directors.  You’re an award winning director yourself.  My question is: were there ever times on the set where Emilio may have suggested a shot and you said, “well, maybe I’d do it this way?” 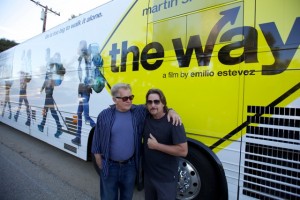 Martin Sheen:  Sure.  Yeah.  He was very open and receptive to any possibility.  Some of the suggestions I made he used and some of them he didn’t.  And he would let me know why.  I was ruled by him and graciously so.  He’s the best director I know.  He wrote the part for me.  I wasn’t going to strain very far from his reign.  He knew where he was directing me.  I didn’t always see the end.  I was only seeing the moment.  But he saw the arc of the character…the distance he had to go.  And so I trusted him.  I’m very gregarious and outgoing and he told me, no, your character is shut down.  You have to earn your way through that growth.  And in the end you become yourself.  But we’re not there yet.  He was very, very specifically focused on how the character was developed.  We shot it in sequence so he knew where I was going.  More power to him.  I owe it to him.  This is the best film I’ve done…the best performance I’ve done…in a very long time.  Not many people are offering me lead roles in movies these days.  In fact, I can’t remember when the last one was (laughs).  But if this were my last film I couldn’t be happier that I’d go out with this one!

2 Replies to “Interview with Martin Sheen”