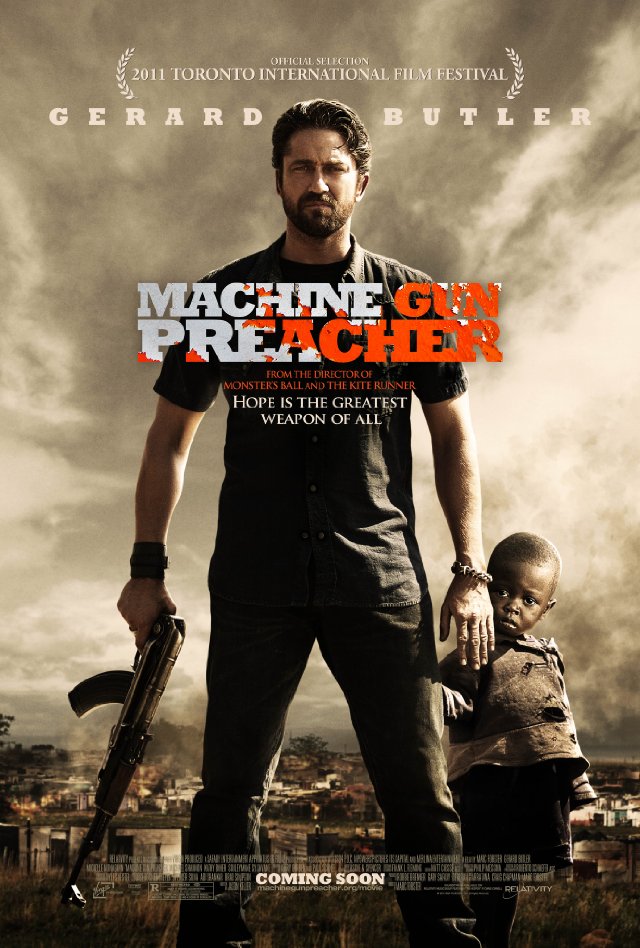 (Beverly Hills, Calif.) August 29, 2011– Relativity Music Group is pleased to announce the release of the original motion picture soundtrack for Golden-Globe® nominee Marc Forster’s Machine Gun Preacher, featuring the original song and lead track “The Keeper,” written and performed by Grammy®-award winning musician Chris Cornell and co-produced by Alain Johannes (Great Expectations) and Chris Cornell. Machine Gun Preacher stars Gerard Butler and is based on the true story of Sam Childers, a former drug-dealing criminal who finds faith leading him on a path to help the children of East Africa.

“The Keeper” will premiere on Chris Cornell’s website (http://www.chriscornell.com) today giving fans the chance to “Donate to Download” to Sam Childers’ Angels of East Africa charity for the first 24 hours; the charity is dedicated to the rescue, restoration and enablement of children caught in the crossfire of the Lord’s Resistance Army – a rebel military group in Northern Uganda and Southern Sudan. On Tuesday, August 30th the song will be available for sale on iTunes®.

Forster said, “We were thrilled when Chris wrote this beautiful and heartfelt song for us. The first time I heard ‘The Keeper,’ I immediately saw it in the movie.  Chris was able to articulate the essence of Sam’s story.”

The Machine Gun Preacher soundtrack features 15 score cues performed and composed by acclaimed musical group Asche & Spencer (Monster’s Ball) and accompanied by a 60-piece Slovak National Symphony Orchestra. The symphony was recorded in a historic facility outside Vienna Austria in the town of Bratislava. Vladimir Martinka conducted the session which was orchestrated by Sean McMahon & David Shephard.

Machine Gun Preacher will be released by Relativity Media in New York and Los Angeles on September 23rd and will expand markets in the weeks to follow.

For additional information on the film, please visit:
http://www.machinegunpreacher.org/movie/

Machine Gun Preacher is based on the true story of Sam Childers, a former drug-dealing criminal who finds faith leading him on a path to East Africa.  Shocked by the mayhem in Sudan, Childers becomes a crusader for hundreds of refugee children. Inspired to create a safe haven for the multitudes fleeing enslavement by the brutal Lord’s Resistance Army, he restores peace to their lives and eventually his own.  Directed and produced by DGA and Golden Globe®-nominee Marc Forster (Finding Neverland, Monster’s Ball) and written by Jason Keller (Relativity’s Untitled Snow White Project), the film stars Gerard Butler (300) in a tour de force performance, alongside a powerful ensemble cast including Michelle Monaghan (Due Date), Kathy Baker (Cold Mountain), Oscar®-nominee Michael Shannon (Revolutionary Road), Madeline Carroll (The Spy Next Door) and breakout actor Souleymane Sy Savane (Goodbye Solo). Producing are Relativity’s Robbie Brenner, Safady Entertainment’s Gary Safady and Craig Chapman, and GG Filmz’s Deborah Giarratana.

Relativity Music Group was formed in 2009 under the leadership of Happy Walters, President of Music and Rogue Sports.  Over the past two years, the music division has provided music supervision, music publishing catalogues and soundtrack services for films produced and/or financed by Relativity Media and other major Hollywood studios, including such titles

Looking ahead, Relativity Music Group will release the following soundtracks in 2011 including: The Debt, Hanna, Like Crazy and Immortals.

Relativity Music Group plans to release 15-20 soundtracks per year via its licensing and distribution agreement with ADA/Warner Music Group.

Chris Cornell is a rock icon whose music career has spanned more than two decades as a multi-Grammy® award-winning musician, universally-acclaimed singer, songwriter and lyricist. An innovator and trailblazer of the 90’s grunge movement, Cornell seduced audiences with his richly melodic voice as the frontman for the Seattle band Soundgarden. Later, celebrated side project Temple of the Dog brought Cornell together with Pearl Jam members Stone Gossard, Jeff Ament and Eddie Vedder. Cornell also collaborated with three other musical pioneers from rap-rock’s Rage Against the Machine to create the multi-platinum supergroup Audioslave. Cornell has seen success in his solo career with the release of “Euphoria Morning” and his latest solo release “Scream.” Cornell’s offerings in music have also segued to cinema. Having contributed solo songs to movie soundtracks from Great Expectations (“Sunshower”) to Mission Impossible II (“Mission 2000”), he became the first American male singer to write the theme song for the James Bond franchise with “You Know My Name” in Casino Royale.

Asche & Spencer is one of the leading theatrical and commercial scoring companies in the United States with studios in Los Angeles and Minneapolis, founded by composer/creative director Thad Spencer and former member of the alternative-country sensation The Jayhawks. Asche & Spencer’s well-chosen collaborations include Marc Forster’s Oscar®-winning film Monster’s Ball, and critically-acclaimed Stay. Asche & Spencer also worked on the Oscar®-nominated documentary War Dance directed by Sean Fine and The Onion Movie.