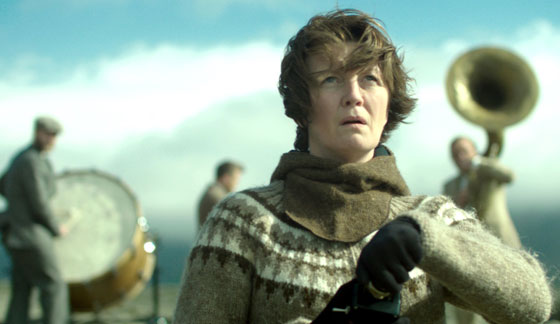 The personal and political overlap in Benedikt Erlingsson’s Woman At War which opens this Friday, March 1st in New York and Los Angeles. The Icelandic comedy-drama stars Halldóra Geirharðsdóttir as Halla, to everyone in town she is the local choir director, but to only a close pair of confidants she is The Mountain Woman. Under this guise, Halla goes far into the Icelandic highlands to single-handedly sabotage a nearby aluminum plant and make global investors wary of further industrializing her country. In addition to Geirharðsdóttir’s passionate lead performance, there’s gorgeous scenery and some quirky narrative choices which make this timely, but never preachy, film well worth checking out.

As she sets about doing the opening mission of Erlingsson’s story, Halla marches to the beat of her own drum, literally. When she draws back her bowstring to let loose an arrow which will fell power lines of a whole factory, Erlingsson’s film composer, Davíð Þór Jónsson, and two additional musicians are diegetically staged behind her drumming (and sousaphoning) along in support. This deadpan trio make recurring appearances each time Halla’s actions tend towards the illegal, sometimes even before she knows she’s in hot water. At least they’re visually charming harbingers. Halla appears to be a lone wolf but she finds support in a local farmer, as well as a choir member who happens to be high up in the government team on Halla’s tail. With all this already on her plate, she also learns that years after submitting her paperwork to adopt a child, the agencies have dropped their age limits and she’s the candidate to take on a daughter from the Ukraine. The additional prospect of motherhood also introduces a beautiful trio of female Ukrainian choir singers who, at the best of times in the film, join Jónsson’s instrumental trio to lovely effect.

Erlingsson doesn’t get too bogged down in the whys of Halla’s quest to save the planet she literally hugs at times because his biggest ally in this is his DP, Bergsteinn Björgúlfsson. The wide shots of the Icelandic countryside are breathtaking and stand in stark contrast to the industrialized locales that Halla is railing against. In some of the films stunning helicopter and drone chase sequences, the quick-thinking Halla could have easily been a goner but for the natural resources and shelters offered up by the countryside she so loves. And while the film’s core cast is small, Erlingsson takes many opportunities to touch upon what’s at stake here whether through background telecasts, school girls posing in support of The Mountain Woman’s manifesto, or a finale that hinges on a flood that’s more than likely influenced by climate change. Seeing all this and knowing that Halla had retired her hopes for motherhood before seeking a way to save the world for its own sake, for me, makes her a woman to root for.