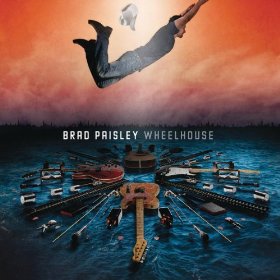 I can’t believe I am about to say this but I really hated this album. I was a huge fan of “This is Country Music”. I mean there was hit after hit, ranging from the title track “This Is Country Music” to “Old Alabama” to “Remind Me” and “Camouflage”…only to name a few. Those are some amazing songs. I really had a hard time even finishing this album one time through. I feel Brad Paisley completely changed his sound and I have no idea why he would want to do that. After winning three GRAMMYs®, 14 Academy of Country Music Awards and 14 Country Music Association Awards including Entertainer of the Year, I understand taking a risk but this is too much for me. There is not one track on the album that I remotely enjoyed.

“Wheelhouse” is also the first time that Brad produced once of his own albums. The first single “Southern Comfort Zone” is a hit on the charts but I have to tell you I almost found myself skipping it. Don’t think that I am not a country fan because I love me some country in fact, I can’t stop listening to Blake Shelton’s new album. That right there is an album that is hit after hit after hit. Every song is gold. One thing this album does have is a shit load of guest stars including Dierks Bentley and Roger Miller with Hunter Hayes on guitar on “Outstanding In Our Field”.Charlie Daniels on “Karate”, Eric Idle on “Death of a Married Man” and LL Cool J on Accidental Racist, which is the worst track on the whole record. Sadly all that talent cannot assist Paisley is scoring a hit album.