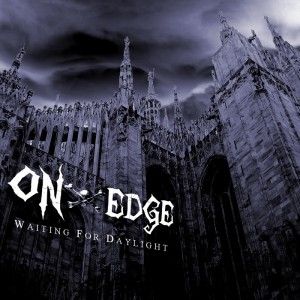 Formed in Yakima, Washington in 1998 the band On Edge is a blending of many different musical styles. From straight up rock and roll to full-blown heavy metal On Edge does it all! The bands first release titled “Waiting For Daylight” features 11 original tracks by the 5 member band. The album is being released via Jason Z.’s Turkey Vulture Records which is based out of Rockford Illinois.

I found the tracks contained on “Waiting For Daylight” to be very enjoyable to listen to. Each of the 11 tracks featured on the album had some really great grooves which pulled you in and made you want more. When an album has the power to pull the listener in the artists have done their job. “Waiting For Daylight” is one of those albums and them some! Tracks like “American Idol”, “Breaking” and, “Complicated” which features a very melodic arrangement that further showcases the bands diversity. Owner/Producer Jason Z. really found himself another great act to add to his already impressive lineup at Turkey Vulture Records.

If you have the chance to pick up On Edge’s debut album “Waiting For Light” definitely do it. You won’t be disappointed