The United States of America is one of the biggest countries in the world, with a huge number of visitors. In 2018, nearly 80 million international visitors came to the US either for a holiday, to look for jobs, or for business purposes. America is one of the most beautiful countries in the world with numerous modern cities to visit, landmarks to see, forests to explore, and sandy beaches to have a fun time.

In today’s world, where information is everything, we often forget about the most fundamental thing about travelling, which is being stressed free. So, to make your US trip more successful and less stressful, here are 3 tips you can use.

Whether you are going on a leisurely trip to the USA or looking to settle in for a long time, getting cheap accommodation is the first thing you should be looking for. To start with, you need to find a place that has access to public transport and malls nearby so that you don’t have to worry about travelling and eating. If you are planning a short stay, you can opt for motels or even rent a room through Airbnb. However, you should get an apartment or share a room with someone if you are here to stay for a long time.

One of the biggest complaints I hear from people is that it’s so hard to keep track of money in the USA. The banks have a hefty fee and transferring money costs a lot. Most of the expats living in America are people doing jobs or businessmen. From time to time, they need to send money back home or to their families. The only advice I have for them is to use Western Union. If you want to send money from the United States to any other country, you are not going to find an easier way than Western Union. You can either send money online, visit one of their locations and send money in person, send money over the phone, or use their mobile app to send money worldwide.

The USA is a very vast country, and in order for you to fully explore it, you are going to need a car. If you are planning to stay for a few days, I would recommend renting a car as it is the easiest and cheapest way to explore the local attractions. If you are here for a job, you should buy a car as soon as you can as cars aren’t that cheap here and you can ultimately save a lot of money and time. It a treat to drive around on open roads and highways in America and I’m sure you’ll love it.

Knowing a few key things before going to a new country comes in very handy. America is a land of opportunity for people who know what they want. If you keep these three tips in mind, you will have an ever better stay than you had imagined.

Ooty also called Ootacamund is known as the Queen of Hill Stations. It is reputed for its scenic splendor and is located in the south Indian state of Tamil Nadu. The place attracts many thousands of visitors from across India. Located in Nilgiri Hills, it is at the height of 2200 meters above sea level and enjoys pleasant weather year round. The landscape is framed by lush tea plantations whose roots can be traced back to the era of the British Raj. Its lush surroundings attract honeymooners and nature lovers to its lap. With help of Oyo Rooms Offers find a place to stay in Ooty all through the year. 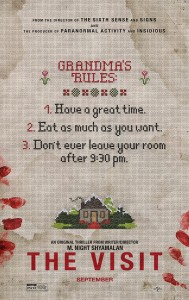 Has M. Night Shyamalan set the bar so low for his movies over the past decade that anything above mediocre is seen as good? That’s a legitimate question I had to ask myself after leaving “The Visit” because I was generally shocked. I couldn’t remember the last time I had left a Shyamalan movie with positive notes to tell. So now a new question must be asked. Has Shyamalan redeemed himself for a decade’s worth of awful movies? No. But “The Visit” is a good start on that road to absolution.

It’s a real trick these days to come up with a new way to tell a found footage movie and for it to make sense. Becca (DeJonge) has an interest in filmmaking and plans on making a documentary for her mom (Kathryn Hahn). The documentary being made by the aspiring teenage filmmaker involves herself and her young brother, Tyler (Oxenbould), visiting their never before seen grandparents. All she knows is what her mom tells her. Becca’s mom says when she first became pregnant with her, an untold incident happened and the family members parted ways, never to speak again. But unluckily for them, the grandparents reached out to them online and wanted to see the grandkids that they’ve never laid eyes on. Sappy documentary gold.

Despite her hesitance, Becca’s mom allows them to go spend the week at the ol’ farmstead. Everything seems normal enough with their grandparents, Nana (Dunagan) and Pop Pop (McRobbie). The elderly couple once had their own individual careers, but moved on from that. Now they take care of a farm and volunteer at the area hospital. Nana has a knack for baked goods and Pop Pop seems like an old fashioned man who keeps busy maintaining the rustic farm. It’s only until their imposed bedtime of 9:30 at night do things really take a turn.

As each day passes, more and more troubling signs crop up and they become more severe as the week goes on. What seems like simple “grandma and grandpa are old” problems slowly unravels into something far more disturbing. As anyone growing up and staying the weekend with their grandparents know, there’s always some weird things that we don’t get that our grandparents do. But when the kids find Nana naked clawing at the walls at the dead of night, these disturbing incidents begin to imply something more sinister.

What Shyamalan has finally done, after a lot of trial and errors, is abandoned the way too serious tone for an engaging mix of laughs and scares. Someone must have told him that one of the best ways to scare an audience is to lull them into a state of safety by making them laugh. Nearly every jump scare is sandwiched between jokes, and those jokes are hits or misses, but I’m more hits than not. Without that chuckle, our defenses aren’t dropped and we instead focus on some of the weaker qualities of the movie, which “The Visit” is not without.

What made Shyamalan such a household name after the “Sixth Sense” was his trademark twist, the ability to tug at the heart strings, jump scares, and Lifetime movie jokes. He’s brought all that back, but his heartfelt message gets lost in the mix and doesn’t land as well as it should. What really helps sell the terror is Dunagan and McRobbie. Both turn in spectacular performances as the borderline senile and sincere grandparents to the children who seem captive by choice. Bonus points are also given when your child actors aren’t nauseating to listen to or watch.

“The Visit” has perfectly blended comedy and horror, but it finds an even balance. It doesn’t take long for an audience to laugh at silly old Nana before clinching the arm rests when she tells Becca a story that could easily be an allegory for hiding bodies at the bottom of the lake near the home. It’s definitely an odd feeling to give a recommendation for a Shyamalan movie, especially when speaking in the present tense. The much joked about director has finally realized that maybe the best way to win an audience back over is to include them in on the joke.

In support of tomorrow’s opening of CAPTAIN AMERICA: THE FIRST AVENGER, Dunkin’ Donuts has partnered with the USO throughout Florida to support our troops at home and abroad.

At seven Dunkin’ Donuts locations throughout the state of Florida, fans are being encouraged to stop by their local store and sign a giant THANK YOU card in support of America’s troops. In exchange for signing the card, the first few hundred people will receive a special gift courtesy of Dunkin’ Donuts. At the end of the events, the cards will be shipped off to the Greater Jacksonville USO (Florida’s only USO) for distribution to the troops.

At select locations throughout the state, there will also be other special events taking place, like our very own CAPTAIN AMERICA stopping by the store to take photos with fans or the local National Guard bringing a some of their toys down and personally thanking everyone for their support.

Please see below all of the exact details throughout the state:
JACKSONVILLE (two locations) 7 to 10 a.m. – Free star shaped donuts per location to the first 100 who sign the USO card
– 2158 Mayport Rd., Atlantic Beach
– 5555 Roosevelt Blvd., Jacksonville

WEST PALM BEACH – 10am – 1pm. – Free Captain America Tri-Cups with the purchase of any beverage to the first 100 people, in addition to star shape donuts to the first 250 to sign the USO card
– 5401 N Military Trail Riviera Beach, FL