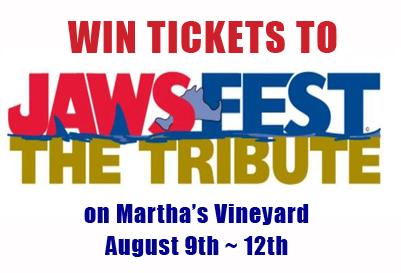 “IT” is the upcoming “JawsFEST: The Tribute,” which in less than two weeks will be taking over the island of Martha’s Vineyard, Massachusetts from August 9 through August 12.  MediaMikes’ Mike Smith and Dave Picton will be there from beginning to end to bring you non-stop coverage of all of the exciting events.  And they want to take two lucky readers with them!

That’s right.  Thanks to the fine people behind “JawsFEST: The Tribute,” MediaMikes.com is giving away two (2) General Admission bracelets to get you into the greatest celebration of all things “Jaws.”  Winners will have access to the opening ceremonies, a chance to tour the “Behind the Screams” display of photographs and memorabilia from the filming of the movie, an afternoon of fun activities at “Shark in the Park,” the opportunity to see “Jaws” on the big screen at Ocean Park and much, much more.   Also included will be special tributes to author Peter Benchley and stars Roy Scheider and Robert Shaw

For the opportunity to win one of these bracelets, just do the following:

This contest prize only consists of General Admission Bracelets to “JawsFEST: The The Tribute.”  Please note, it is the winner’s responsibility for travel and hotel accommodations.

For more information on “JawsFEST: The Tribute,” please go to www.jawstribute.com