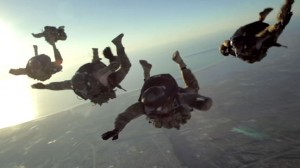 I have a confession to make here. During my entire time in the U.S. Army I feared for my life for exactly 5 hours. I was very fortunate to serve in a time where the world was relatively peaceful. Thirty years later, sadly, things have changed.

Made with the cooperation of the Department of Defense, and purporting to feature real active duty Navy Seals in its cast, “Act Of Valor” gives an unprecedented look into the lives, both in uniform and out, of the bravest of the brave. The story concerns a terrorist plot to smuggle undetectable suicide vests into America. Assigned to foil the plot is a tight knit group of men and women just like you or I. If you passed them on the street or saw them in the grocery store with their families you wouldn’t blink twice. But unlike you or I, when the time comes to go to work they do it with the knowledge that they may never see those families again. They’ve made the ultimate sacrifice so, if necessary, they can make the ultimate sacrifice.

The story is pretty standard as military films go. Bad guy wants to hurt us. We do our best to stop him. But here the camera takes you into the middle of the battles. Almost silent in their movements, the Seals move with the efficiency of a well oiled machine. Yes, the film is action packed…if you’ve ever played “Call of Duty” you’ve seen it…but somehow seeing these Seals react to each situation is sobering. The exhilaration of playing a game is gone and you’re hit with the fact that war has consequences.

On October 6, 1981 Egyptian President Anwar Sadat was assassinated. My unit in Germany was put on alert and at 1030 in the morning we headed out to what I was sure was certain war. Five hours later they told us to come home. The scariest five hours of my life. “Act of Valor” is a film dedicated to those who face their fears twenty four hours a day.

The screening will taking place on Wednesday, Feb 15, 2012 – 7:30pm — at the AMC Main Street Theatre in Kansas City. Follow the instructions below if you would like a chance to win tickets.
Instructions:
1. Tickets are available first come first serve to the first 25 people to leave a comment below or email us.
2. One code will be emailed to those people which will admit 1 person and 1 guest to the screening.
3. You will need to register at http://www.gofobo.com/rsvp to receive your tickets.

Passes are limited and are available on a first-come, first-served basis.

ABOUT ACT OF VALOR
Directors: “Mouse” McCoy, Scott Waugh
Writer: Kurt Johnstad
Cast: Active Duty Navy SEALs, Roselyn Sanchez, Alex Veadov, Jason Cottle, Nester Serrano
Producers: Mike “Mouse” McCoy, Scott Waugh
Executive Producers:  Jason Clark, Max Leitman, Michael Mailis, Jay Pollak, Lance Sloane, Benjamin Statler, Thomas Tull
Official SIte: http://actofvalor.com/
An unprecedented blend of real-life heroism and original filmmaking, Act of Valor stars a group of active-duty Navy SEALs in a powerful story ofcontemporary global anti-terrorism. Inspired by true events, the film combines stunning combat sequences, up-to-the minute battlefield technology and heart-pumping emotion for the ultimate action adventure.
Act of Valor takes audiences deep into the secretive world of the most elite, highly trained group of warriors in the modern world. When the rescue of a kidnapped CIA operative leads to the discovery of a deadly terrorist plotagainst the U.S., a team of SEALs is dispatched on a worldwide manhunt. As the valiant men of Bandito Platoon race to stop a coordinated attack that couldkill and wound thousands of American civilians, they must balance their commitment to country, team and their families back home.
Each time they accomplish their mission, a new piece of intelligence reveals another shocking twist to the deadly terror plot, which stretches from Chechnya to the Philippines and from Ukraine to Somalia. The widening operation sends the SEALs across the globe as they track the terrorist ring to the U.S.-Mexico border, where they engage in an epic firefight with an outcome that has potentially unimaginable consequences for the future of America.
Be sure to visit ACT OF VALOR on Facebook https://www.facebook.com/ActOfValorMovie and Twitter http://twitter.com/#!/actofvalorfilm
Read Complete Article
Filed Under: Film Headlines Tagged With: act, official, trailer, valor
Page 1 of 1