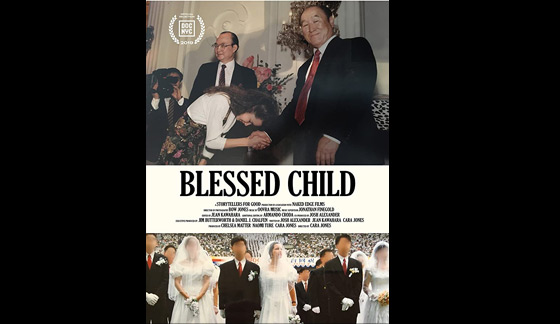 There’s a statement/joke I’ve heard when it comes to talking about cults and religion. It goes something like, “Cults + Time = Religion.” Granted, I could be butchering it. Regardless, the joke is that all religions started out as cults before legitimizing themselves. I say this first and foremost because “Blessed Child” deals with the personal story of Cara Jones and her time in the Unification Church, a new religious movement born in South Korea, which focuses on the teachings of Jesus. The teachings of Jesus range from the mainstream (Presbyterian, Catholic, Lutheran, etc.) to the extreme (Peoples Temple, Branch Davidians, Heaven’s Gate, etc.). My understanding is that the Unification Church toes the line between these two polar opposites. If you’re looking for an in-depth look at the church, “Blessed Child” is not for you. But if you’ve done a little bit of general reading on Unification Church, “Blessed Child” serves as an intimate look at its impact.

“Blessed Child” starts in 1995, where director Jones is getting married, alongside hundreds of other couples at an Olympic sized stadium before the Unification Church. She shouts, along with thousands, her marriage vows on the field, while holding the hand of a man she barely knows. It’s surreal to believe and see something bizarre and forced, especially when it happened in my own lifetime in a first-world country. The marriage, and her time in the Unification Church, didn’t last long. We’re not told exactly how she left (or escaped), but we know that she had to make a difficult choice; leaving her parents and family behind in a potential cult.

While Jones’ story is definitely the crux of the film, there’s a lot of other viewpoints included in this documentary. Jones talks with others who left (or escaped) the Unification Church. We learn that people left the church due to their own sexual orientation, for socioeconomic reasons, or a person’s general feeling of being excluded for whatever reason. The documentary doesn’t necessarily paint the Unification Church in a negative light, but it isn’t about to paint it in a flattering one.

“Blessed Child” has a surprising amount of nuance, especially since outsiders tend to label participants in these kind of religious sects as “nuts” or “brainwashed sheep.” The film establishes some solid reasoning as to why people become attracted to what it preaches. It uses this through archive footage and interviews. Unfortunately for me, it didn’t pull back the curtain enough for me to get a general enough feeling about the inner workings of the Unification Church. Halfway through the movie I opened up Wikipedia and hit up Google to answer some of my more burning questions. If anything, “Blessed Child” may be a form of self-medication and therapy for Jones, who reckons with her emotions.

Not to say that Jones’ story isn’t interesting or compelling, but at times it feels like there’s not enough information to digest, hence it’s incredibly brief running time. “Blessed Child” is a fairly interesting documentary, but not on par with others dealing with this subject matter. The reason it’s watchable though, is because Jones bares so much of herself that it’s fascinating to watch Jones break down and eventually reconcile with her parents and herself.