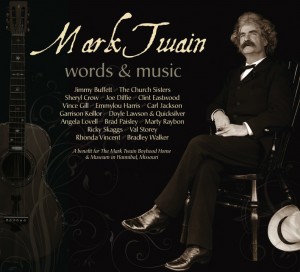 Normally, I wouldn’t think that I would ever listen to a CD about Mark Twain’s life. This CD is being released by Mailboat Records, which is backed by Jimmy Buffett.  Yes, that is all I need to have in order to listen to a CD about Mark Twain. “Mark Twain: Words & Music” is a double-CD which tells the story of Twain’s life in spoken word and song. Voices on this project include Jimmy Buffett (as Huck Finn), Garrison Keillor (as the narrator), Clint Eastwood (as Mark Twain) and Angela Lovell (as Susy Clemens). Yes, I did mean that Clint Eastwood.

This is not just a typical spoke word album. There are perfect blend of 14 story segments with 13 corresponding songs performed by Emmylou Harris, Doyle Lawson & Quicksilver, Rhonda Vincent, Bradley Walker, Carl Jackson, The Church Sisters, Sheryl Crow, Brad Paisley, Marty Raybon, Val Storey, Vince Gill, Joe Diffie, and Ricky Skaggs. Is that enough talent for you to handle on on CD? This project was produced by Grammy Award-winner Carl Jackson in order to benefit the Mark Twain Boyhood Home & Museum in Hannibal, Missouri to commemorate the 100th anniversary of Twain’s death and 175th anniversary of his birth back in 2010.

This CD doesn’t just stop at the tracks on both discs, also includes is a very detailed 40-page linear notes included, which complements this album very well.  The liner notes are great and even include pictures of Twain along with the text. I recommend listening to the album and then checking out the book. If you are a history buff, this gives a unique approach to the life of one of our greatest scholars.  If you are a Jimmy Buffett fan, then you are going to love getting to hear him put his spin on Huck Finn, it is awesome. Clint Eastwood also channels his inner Dirty Harry once again for his role of Mark Twain. Lastly, if you are a fan of bluegrass/country music then you will definitely dig this.