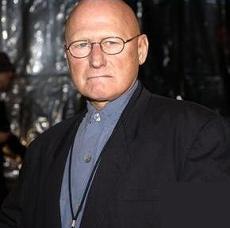 In a career spanning six decades, James Tolkan has conquered every medium he’s ever attempted. While pursuing a career in music at college he auditioned for a school play on the advice of a friend who suggested performing in front of an audience would help him with his stage fright. Tolkan was cast in the lead and he hasn’t looked back. Though best known for his work in “Top Gun” and the “Back to the Future” trilogy, I knew him best for his theatre work. In 1984 Mr. Tolkan originated the role of quick-tempered real estate salesman Dave Moss in the Pulitzer Prize winning drama “Glengarry Glen Ross,” a role I myself played many years later. While preparing for his appearance at this weekend’s Con X Kansas City Convention Mr. Tolkan spoke to Media Mikes about Broadway, “Back to the Future” and his memories of directors Tony Scott and Sidney Lumet.

Mike Smith: I guess I’ll start with the standard first question: what led you to become an actor?
James Tolkan: Oh my gosh! It’s a really complicated answer. When I got out of the Navy I was totally lost. I went back to college where I majored in art and minored in music. I was studying singing. I was very nervous getting up in front of an audience so a friend of mine suggested I try out for a play so I could get used to being in front of an audience. So I tried out for a play and was cast in the lead. I was like, “hey, this is interesting.” So I did another play at the community theater and suddenly I became very interested in acting. I then went to the University of Iowa, which had a large theater department and it was there that I was “encouraged” to go to New York and study the Method with some of the great teachers. So in 1956 I got on a Greyhound bus in Iowa City with $75 in my pocket and I went to New York to become an actor. I didn’t know what I was getting into…I was a total hick. I got off the bus and I was scared to death. I went through all kinds of various jobs while I studied with Stella Adler. After the first year she gave me a full scholarship to study with her. And then I started working. The first play I auditioned for off-Broadway I was cast. A lot of casting people saw me and I started going from one play to another. I also wanted to study with Lee Strasberg, which I did for three years. Both teachers were very valuable…but very different. It’s been a great experience. I’m really just a New York actor. I’m a stage actor. And I said I was never going to Hollywood until Hollywood sends for me. And in 1984, while doing the David Mamet play, “Glengarry Glen Ross,” on Broadway, Robert Zemeckis called me and asked me to be in “Back to the Future.” Of course nob ody knew who Robert Zemeckis was back then but I said “ok” because this was my chance to go to Hollywood. So after a year on Broadway I went to Hollywood and did the movie. I stayed in California and did some television series. Then I did “Top Gun” and all of a sudden I’m a Hollywood actor! It’s been a wonderful odyssey and I’ve survived it all!

MS: You started your career in what is now referred to as the “golden age” of television. In your opinion, what’s the biggest difference in the way television shows are produced today versus then?
JT: Well, at that time, a lot of television was done live. It was live television. You go on and you do it and that’s it! Today everything is much more safe. The three camera comedies. You have a live audience and a controlled condition. And the writing is very different. The writers today are very bright and very…demanding. They don’t always know how to use actors.

MS: You understudied Robert Duvall in a couple of Broadway shows, including “Wait Until Dark.” Did you ever get to play “Wait Until Dark” villain Harry Roat on stage?
JT: I took over the role of the Longshoreman in Arthur Miller’s “A View From the Bridge” from Robert Duvall on Broadway and played that part for many months. Then “Wait Until Dark” opened with Lee Remick. Two weeks into the run I get to the theater and there’s no Robert Duvall. The director tells me Duvall broke his hip riding horseback and I was on. I was ready and I went on and I played that part for two years. I played it for a year on Broadway with Lee Remick then I played it with Shirley Jones on a tour and then later with Barbara Bel Geddes. And the character was so dark. Believe me it was hard on one’s psyche to do that.

MS: I’m so glad you mentioned “Glengarry Glen Ross.” You originated the role of Moss on Broadway and I’ve actually played Moss in a production here in Kansas City.
JT: Really? Good for you. Isn’t that just a fantastic play? It was a great experience in my life. To work with David Mamet. We previewed in Chicago and it was a big hit there. Then we took it to New York where it was a huge hit. It was one of those shows where you know you held the audience the whole night in the palm of your hands. It’s getting ready to go back to Broadway this year with Al Pacino playing Shelly “The Machine” Levine.

MS: Really? Pacino was a great Ricky Roma in the movie. Of course he’s older now.
JT: Before the movie was made Sidney Lumet had the rights to the show and he called all of us to come in and have a reading up at his office. At the time Sidney wanted Pacino to play Shelly but Al insisted on playing Roma. The project fell through and the production ended up in someone else’s hands and Al got to play Roma.

MS: Which leads me to my next question. You were obviously a favorite of Sidney Lumet, having worked with him several times. As a director yourself did you pick up any tips from watching him work?
JT: If you want to learn about how to approach actors and acting on a film, work with Sidney Lumet! Of course it’s a little late now but he was so special…so wonderful. He made you feel like THIS is why you want to be an actor. He was just amazing. With most movies in Hollywood you get together just before you start shooting and sometimes it’s 20 takes…50 takes…whatever until everyone is comfortable with the scene. With Sidney it was three weeks of rehearsal. The first week you just sat around the table. He’d say, “OK, no acting…just talk.” It’s very simple. We’re just trying to relate and connect with each other. The second week we’d start getting up on our seats and playing the various scenes. The third week we’d run through the script in sequence like it’s a play and he’d would go off with the cinematographer setting up all of the shots. So when we got on the set everybody knew their job. You’d start shooting and he’d get everything in one or two takes. You were going home every day at four o’clock. It was like working with a master. He was just a wonderful, warm and brilliant person.

MS: Tony Scott, who directed you in “Top Gun,” recently passed away. Do you have any memories of him to share?
JT: He was such a regular guy…rough and ready. He was always smoking a cigar. He was a mountain climber and he rode motorcycles. He was quite different from Sidney Lumet but a very good man to work with. Sometimes he’d want to do a scene that wasn’t scheduled and I’d tell him I wasn’t ready and he’d just smile and say, “you can do it, James” and we’d get it done. He was very off the cuff and non-chalant. But at the same time intense, if that makes sense. I’m still stunned about how he passed. Why he would make that kind of choice is totally a mystery.

MS: Originally “Back to the Future” ended with the words THE END. Only when it was released on home video did the words TO BE CONTINUED appear. Were you aware while you were filming that there were three films planned?
JT: Oh no. The first film was a very small movie. Steven Spielberg at the time was more interested in another movie he was producing called “Goonies.” This was something that was really on the back burner. Nobody knew who Robert Zemeckis was. We were working for not a lot of money and had really tiny dressing rooms. Then that movie opened and it was an amazing success! Like they say, all of the planets had to have been aligned for that movie to be so successful. And right after that they said they were going to do a part two and part three. But when we finished filming part one there was no talk whatsoever of the sequels.

MS: Were you able to do any scenes with Eric Stoltz?
JT: I did. When I got to the set Eric was playing Marty. But after seven weeks of shooting they shut down the production. During the dailies the filmmakers discovered they were more interested in the characters AROUND Marty rather than Marty himself. And that’s when they decided they would wait for Michael J. Fox to wind up his television series and then start up production again. And believe me that was a very brave decision. If that didn’t work out you would never have heard of Robert Zemeckis or Bob Gale. I was told that when they shut down the production after seven weeks Eric Stoltz was in his dressing room and he commented, “well, they can’t fire me now.” And that very day he was fired. But that’s how it goes. It’s a crazy business. (NOTE: Michael J. Fox was the producer’s original choice to play Marty McFly but, due to his commitment to the television series “Family Ties” the studio went with Eric Stoltz. Due to many reasons, including those Mr. Tolkan mentioned, Stoltz was let go and Fox brought on, often fulfilling his television duties during the day and filming “BTTF” at night.)

MS: Are you working on anything now?
JT: No, I’m pretty much retired. I did do an HBO movie over the summer with Al Pacino and Helen Mirren about the trial of record producer Phil Spector. I play the judge. Again, it’s a David Mamet script which he also directed. He called me up and cast me. If someone calls me, I’ll do it. But right now I’m enjoying my life.