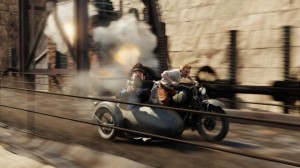 When I first saw “The Adventures of Tintin”, I wasn’t sure what to expect. The trailer looked “just-ok”. Let me tell you, once I saw it I was blown away. Steven Spielberg’s films have been hit and miss the last few years but this was a sure fire hit. I loved it so much and in fact was one of my favorites from 2011. The performance capture in the film was just so astounding. Some of the action scenes in the film were absolutely breathtaking. This film is not all action though it is also very funny as well. You can tell that a lot of time and effort when into making this film look amazing. I also originally saw it in 3D and I felt it really worked well with the film. If you have a chance to see the film in 3D, I would suggest you checking it out rather than this 2D version. The 2D version still works but the effects really get a lot of depth in 3D and just feels so much more exciting.

The film follows Tintin (Jamie Bell) a young reporter and his dog as they in pursuit for a mysterious model ship. The two travel from Europe to the Sahara and Morocco in hopes to solve the case. They meet up with drunken captain, Haddock (Andy Serkis), who aids them in their search. The team find that Ivan Ivanovitch Sakharine (Daniel Craig), has plans to also find this model ship since it holds the key to finding a long lost treasure. Due to the lack of interest in the US for this film, I am not sure if there will be future additions to the series but I really hope so because this could make such a great franchise.

The film looks perfect in video and really shines. It also looks the best with its performance capture, easily the best that I have seen to date. The audio is beyond amazing DTS-HD MA 7.1 track. This is becoming a tradition for Paramount who has also included 7.1 for “Hugo” and “Puss in Boots”. Besides the Blu-ray copy of the film, this release also includes a DVD Copy, an Ultraviolet digital copy and BD-Live. These are all great features and really gives many options for this film to watch.

The special features includes in this release are great but missing any commentary tracks from Steven Spielberg or Peter Jackson. There is a two part feature called “Toasting Tintin” which celebrates the beginning and the end of the film’s production. “The Journey to Tintin” is a short feature with director Steven Spielberg chatting about his road to bringing “Tintin” to the big screen. “The World of Tintin” is a look into the character of Tintin himself. “The Who’s Who of Tintin” focuses on the character and the performance capture in the film. “Tintin: Conceptual Design” focuses on how the film wanted to stay true to the original Hergé design. “Tintin: In the Volume” is a piece on shooting in 3D and focusing on the production. “Snowy: From Beginning to End” focuses on the dog from the page to the screen. “Animating Tintin” is an in depth look into the films animation. “Tintin: The Score” is a feature on composer John Williams Lastly “Collecting Tintin” is a short features on the films toys. 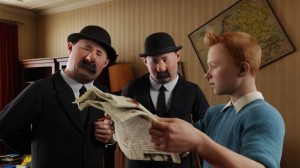 In 1981, after reading a review that compared his recent “Raiders of the Lost Ark” with the illustrated adventures of a young man named “Tintin,” director Steven Spielberg began reading the various comics detailing the escapades of the diminutive Belgian investigative journalist. In 1983 he purchased the rights to make a film. The saying goes that all good things come to those who wait. After almost 30 years the wait is over. And well worth it.

While visiting the local market Tintin (Bell) is captivated by a model ship, the Unicorn, being offered for sale. The seller seems eager to move it and the sale is made for the whopping price of one pound. Moments later another buyer identifying himself as Mr. Sakharine (Craig) attempts to buy the ship, offering much more than the original asking price. But a sale is a sale and, despite his best offer, Mr. Sakharine watches Tintin walk off with the ship. Intrigued by Sakharine’s urgent insistence on obtaining the model, Tintin, with the help of his dog Snowy, does what he does best. Investigate.

I will make no secret here that if Hollywood was heaven Steven Spielberg would be my god (little “g” of course). His film “Jaws” is the reason I began my interest in movies and that interest has guided me both personally and professionally, up to and including being able to write film reviews. That being said, I would be remiss if I didn’t say that even if Steven Soderbergh had directed “The Adventures of Tintin” I would still rave about it.

Presented in the format known as motion capture, where the actions of the actors are digitally transferred to a computer, “The Adventures of Tintin” is an adventure film that carries you away in its magic. As Tintin and Snowy begin their quest they run into Captain Haddock (Serkis), whose ship has been chartered by Sakharine for a journey to Morocco. When Sakharine attempts to cause a mutiny, Haddock, Tintin and Snowy escape and make their way by land and air to the African country where they encounter another model of the Unicorn. And a clue that could lead them to a fantastic treasure!

I have never read a “Tintin” comic. In fact, if I hadn’t grown up with a few friends that collected comic books I most likely wouldn’t have heard of them. And I say this because, Tintin fan or not, if you like adventure you will like this film. Director Spielberg has given us sharks and U.F.Os and aliens and dinosaurs. His vision, of course, but helped by brilliant special effects people. And the same goes here. This is the best motion capture film I’ve ever seen. The attention to detail is incredible, so much so that you can even see the small flecks of dust when they are reflected by a flashlight. My biggest complaint about motion capture films had been that no matter how “natural” the characters appeared their eyes always looked creepy. Credit Spielberg and team, which includes “Lord of the Rings” director Peter Jackson, for clearing up that problem. The characters appear as lifelike as a digitally created person can. Especially one who bears a striking resemblance to Spielberg. And, as he has for over twenty films with the director, John Williams provides a brilliant score that captures the on screen story beautifully.

Click here to check out our interview with Wayne Stables, Visual Effects Supervisor for “The Adventures of Tintin” 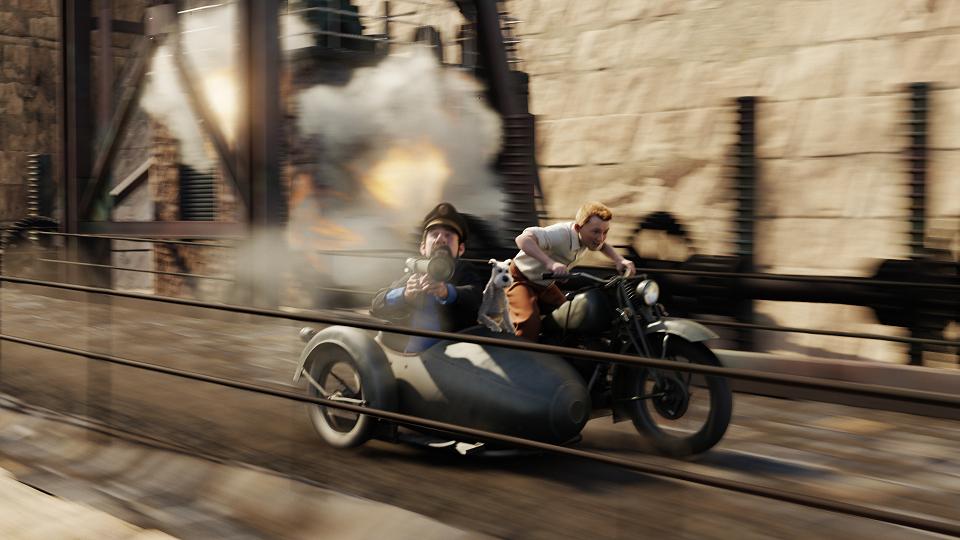 Check out the following images from Comic Con for “The Adventures of Tintin: Secret of the Unicorn”. The performance capture film is starring Jamie Bell, Andy Serkis, Simon Pegg, Nick Frost and Daniel Craig. The film is directed and produced by Steven Spielberg and also produced by Peter Jackson. It is set for release December 23, 2011.