“The Tiger” is a Korean drama that probably no one will ever see yet it was easily one of my favorite films this year. It stars Choi Min-sik and a CGI tiger, which looks not good but outstanding. Why didn’t this get a bigger release is beyond me. You might know Choi Min-sik from “Oldboy” from 2003 not the terrible Spike Lee remake with Josh Broli from 2013 and also from the Scarlet Scarlett Johansson led “Lucy”.

The film is a bit long running about 2.5 hours but the payoff is totally worth it. Even though slow moving, the story keeps you going and draws you in and you develop feelings for this CGI marvel. The wolves are not as fine tuned but still impressive. IF you are done with all the summer dazzle action films, definitely give this a look!

Official Premise: n ex-sharpshooter for the Kingdom of Korea (Choi Min-sik, Oldboy) is hunting the country’s last tiger. But Japanese forces and vicious local poachers also seek “The Four-Legged Mountain Lord,” and will stop at nothing to claim their prey.

The Blu-ray’s 1080p transfer compliments the VFX and beautiful locations perfectly. I also well in love with the film’ major cue from the score. I absolutely loved it and it just sounded amazing. The only special feature is a theatrical trailer included, which is a major shame because I would have loved to seen a featurette on the tiger’s VFX. 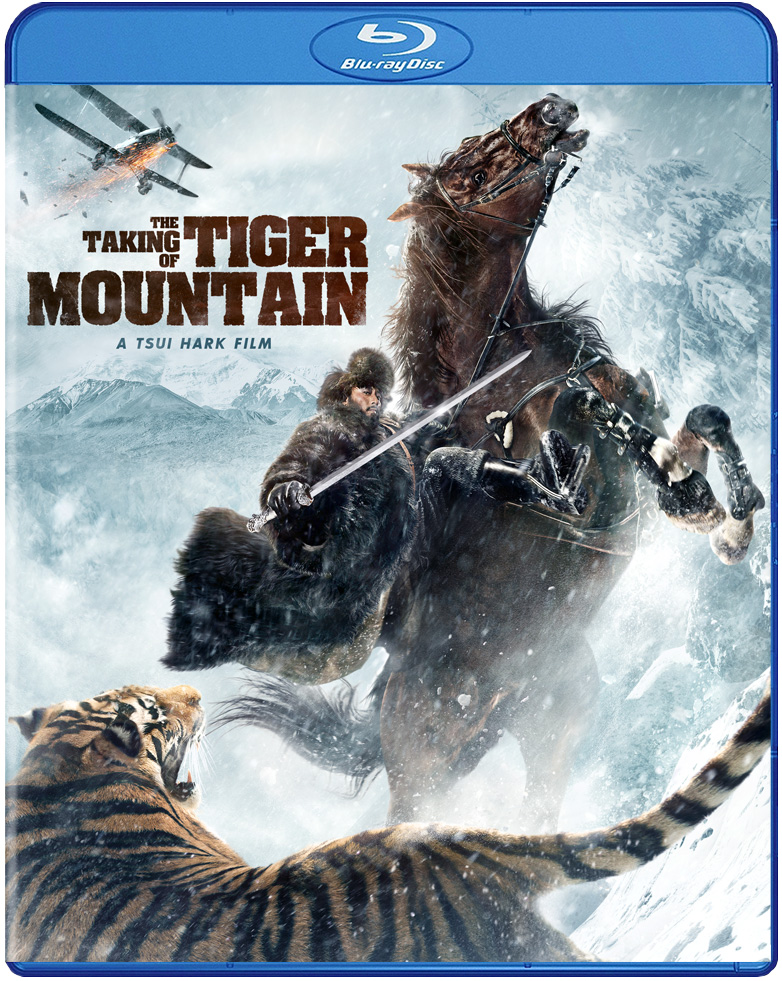 To celebrate the Blu-ray release of Tsui Hark’s “The Taking of Tiger Mountain”. Media Mikes would like to give our fans a chance to win a Blu-ray of the film. If you want to win this great prize, please leave us a comment below or send us an email with your favorite Tsui Hark film. This giveaway will remain open until June 12th at Noon, Eastern Time. This is open to our readers in US and Canada only. One entry per person, per household. All other entries will be considered invalid. Media Mikes will randomly select winners. Winners will be alerted via email.

THE TAKING OF TIGER MOUNTAIN stars Zhang Hanyu (Special ID, Back to 1942), Lin Gengxin (Young Detective Dee: Rise of the Sea Dragon), Tong Liya (Beijing Love Story), Tony Leung Ka Fai (Tai Chi Zero, Tai Chi Hero) and Yu Nan (The Expendables 2). The film is based on Qu Bo’s novel “Tracks in the Snowy Forest,” which also served as the basis for “Taking Tiger Mountain by Strategy,” one of eight model operas produced during the Cultural Revolution. Bonus materials include interviews with the filmmaker and cast.

Synopsis: Tsui Hark’s thrilling adaptation of Qu Bo’s beloved adventure novel stars Tony LEUNG Ka-fai as a ruthless bandit, ruling the lands of Northeast China from his fortress on Tiger Mountain. A captain of the Liberation Army (LIN Gengxin) launches a counter-insurgency against the dictator with a skilled investigator (ZHANG Hanyu) sent to destroy the gang from the inside.