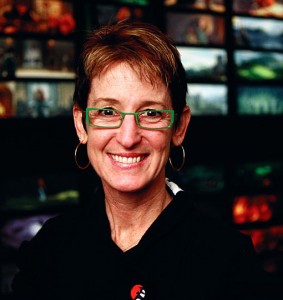 Tia Kratter joined Pixar Animation Studios in April 1993 as a digital painter during production of the studio’s first feature film, “Toy Story.” She has subsequently held the shading art director role on “A Bug’s Life,” “Monsters, Inc.” and “Cars,” where she was responsible for specifying the color and texture of every object modeled for a film. Kratter most recently completed work as the shading art director for Disney•Pixar’s feature film “Brave,” which opened in theaters in summer of 2012 and is set to release in North America on Blu-ray™ and DVD on November 13, 2012. Prior to Pixar, Kratter was a background painter at Disney Feature Animation from 1980 to 1985, where she worked on a variety of acclaimed animated films including “The Little Mermaid,” “Aladdin,” and “Beauty and the Beast.” Media Mikes had a chance to ask Tia a few questions about working with Pixar and on the film “Brave”.

Q: You’ve been at Pixar since the first Toy Story, working in the art department. How has your work evolved over the past few years?
A: You’ve done your homework! Back in 1993, when I began to work on “Toy Story,” the internet as we now know it didn’t exist. So all of our reference on that film was personally-found. In other words, when we had to figure out Sid’s hair, I went directly to my oldest son’s flattop haircut and used that as reference. Nowadays we back up real reference with information we find online. It helps streamline things. Still, and you’ll hear this a lot this morning, there’s nothing like touching and seeing the real thing. Also, on “Toy Story,” we really didn’t know what the heck we were doing. Now we’ve got all sorts of hoops to jump through. Making a computer animated film is not a quick process, and just because we’re using a computer it doesn’t really go any faster than classic hand-drawn animation.

Q: What is the coolest thing about working at Pixar?
A: 1. The cereal bar. We get a choice of about 18 different cereals in our brown bag kitchen to choose from every morning. Once a week I go for the Captain Crunch, which my mom never let me eat when I was a kid. 2. The people (actually that should be my number 1). You can’t believe how many thoughtful, kind and creative people work here. I’m in awe of the talent around me every single day. 3. The commitment to making great films. We try hard, really hard, to make our films something that we love. And, by feeling solid about them ourselves, we hope the audience does too.

Q: Which were the most difficult elements to translate to the movie?
A: Initially, Merida’s hair of course was a challenge. But we knew it was going to be from the very beginning. And when we can anticipate our challenges, we tend to do really well. It’s those little surprises that come up along the way that can really throw us for a loop. We had never done a horse, except for Bullseye in “Toy Story 2” and “Toy Story 3.” In “Brave,” we wanted to create a fairly realistic horse, one that didn’t talk or make funny faces. Although Angus was a challenge, he remains one of my favorite characters in the film because he is elegant, strong and visually beautiful.

Q: In Brave the landscapes, Merida’s hair and, in general, the care for details is really impressive. Can you tell us about the process/es required to bring these details to life?
A: Thanks for your nice note! What we discovered in both the landscapes and Merida’s hair was the beauty of chaos. The landscapes were a combination of grasses, mosses, ferns, rocks – different textures across any environment. Similarly, Merida’s hair was lots of different oranges and yellows, and every ringlet had its own personality. A lot of times you think characters and landscapes are quite different, but in this case they took on the same types of challenges. So, in order to make them look believable, we gathered a lot of research for both the hair and the landscapes and took that all the way through the process, even getting some help from the lighting team to bring it all together.

Q: How would you describe the ultimate goal of the shading art director?
A: My ultimate goal is to support the visual inspiration of the director and the production designer. I’m responsible for specifying the colors and textures for things that are modeled in the film. It’s one small part of a greater group of people who come together to make the visuals work as a whole. There’s really no part of the film that I can point to and say, “I did that.” Making a CG animation film is so collaborative, that if you’re looking for individual accolades, this probably isn’t the right medium for it.

Q: Did 3D ever come up as part of the design process?
A: That’s a great question. We never make creative decisions for our films based on the 3D, but we find that it’s another good mechanism for conveying our stories. I loved seeing “Finding Nemo” in 3D. That deep, atmospheric world lent itself so well to another dimension of viewing. As far as the art and design of “Brave,” we never stopped and rejiggered things specifically for 3D. We do our best to make a visually gratifying film for whatever medium it’s shown in.

Q: In special feature “Brave Old World”, we see how you were taking photos of landscapes and how you were drawing details with brush and watercolors. Was it difficult to move all those textures, spongy grass and hardness of the rocks, to the film?
A: From an artistic point of view, it’s not difficult at all. We take our drawings, photographs and real reference from our trip, show them to our technical team and describe how they inspired us. Now, if you ask the same question to our technical team, they would probably have a different answer. It’s one thing to be inspired by something; it’s another to actually bring it to the screen. We worked together, sometimes for months, to get the look and texture of something right. We’ll go back and forth between art and, in my case, shading or texturing, to come up with a solution that’s visually pleasing technically feasible.

Q: How long did it take you and your team to complete the movie?
A: I worked on “Brave” for 6 years, which is a little longer than normal. The typical production time on a Pixar film is 4-6 years, so we were on the longer end for “Brave.”

Q: Do you have any fun stats or numbers concerning the art design and renditions?
A: Here’s a number: A113 is seen in every one of our films. It’s the animation classroom at Cal Arts, one of the schools where quite a few of our artists studied. You can find that over the entry door in the Witches cottage. (but look carefully…it’s not easy to find). Merida has a total of 22 different costumes. Merida has more than 1500 individually sculpted “keyhairs” that once rendered in the computer generate about 111,700 hairs. Yikes!

Q: Are you already working on another project?
A: I’m not. Pixar is really thoughtful about giving us a break after we’ve worked for 6 years on a film. So for the past few months I’ve been working for Pixar University, the internal, educational branch of Pixar. It’s a great chance to recharge before moving on to another film.