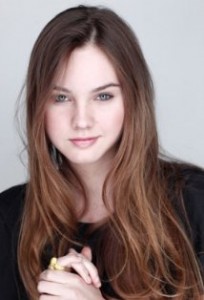 Texas-born Liana Liberato is a month shy of her 18th birthday and already she has honed out a career that would make other actresses envious. Before age 10 she had been discovered doing local theatre in Galveston and was encouraged to head to Hollywood. Roles on such popular television shows as “House,” “Cold Case” and “CSI: Miami” followed and soon the movies came calling. In 2010 she appeared in the feature film “Trust,” playing a young girl victimized by an on-line predator. Her performance in the film was deemed “remarkable” by the late Roger Ebert and she later went on to win the Silver Hugo Award as Best Actress at that year’s Chicago International Film Festival. Other film roles include “The Last Sin Eater,” “Safe Harbor” and “Trespass,” in which she co-starred with Oscar winners Nicolas Cage and Nicole Kidman. This week she’s back on the big screen in the new film, “Stuck in Love.” While visiting Kansas City Ms. Liberato sat down with Media Mikes to talk about the new film.

Mike Smith: Give our readers an introduction to Kate, your character in “Stuck in Love.”
Liana Liberato: Kate is a girl who becomes involved with a boy named Rusty, played by Nat Wolfe. Rusty is a hopeless romantic who has had a crush on Kate for a long time. Kate is battling a long time drug and alcohol addiction and, with Rusty’s help, she replaces that addiction with love.

MS: What attracted you to the project?
LL: I think the challenge. There aren’t a lot of roles out there like this. I liked the ideas shared in the film. And I’ve never played a role like this before.

MS: Speaking of roles, most of your film work has been pretty intense so this was certainly a chance to do something different. What was it like as an actress to work in new territory?
LL: Kate does have some darker layers to her so it wasn’t that different from what I’d done before. One of the main differences, I think, is that she’s more mature. She’s more worldly. Also, in a lot of the other projects I have done I was never really exposed to the younger generation…actors my own age. So working with Lily (Colins) and Nat and Patrick (Schwarzenegger) was really a great experience.

MS: You also got to work with a couple of Oscar nominated actors in Greg Kinnear and Jennifer Connelly (NOTE: Kinnear was nominated for the Best Supporting Actor award for his role in “As Good As it Gets” while Connelly was nominated for, and won, the Best Supporting Actress Oscar for “A Beautiful Mind”). Were you able to study them or learn from them?
LL: They were awesome. And they were both so very down to earth. Usually between takes Jennifer would just sit down next to me on the couch and we’d talk about our day. So would Greg. They were both just really down to earth people.

MS: What do you have coming up?
LL: I just finished a film about a week ago called “Dear Eleanor,” and it is completely different than anything I’ve ever done. It’s a comedy and my character is actually funny and lighthearted. It’s basically a young person’s “Thelma and Louise.”

MS: Are you Thelma or Louise?
LL: (laughs) You’ll have to wait and find out. A young man daydreams in class, staring at the beautiful girl sitting next to him. His thoughts appear on screen. Yes, he is a writer. One day he hopes of achieving the level of his idol, Stephen King. But first he has to write something.

A true ensemble piece, “Stuck In Love” is a well intentioned film that comes across at times more as a novel then a movie. This could be due to the fact that first time writer/director Boone wanted to be a writer. He too has a thing for Stephen King so it’s obvious that the daydreaming young man, Rusty (Nat Wolfe) is his alter ego. Rusty’s father, William (Kinnear) is a successful author and his sister, Samantha (Collins), has just sold her first book. To the same company that publishes King. As Thanksgiving approaches the three begin preparations for their dinner. William sets an extra place for his ex-wife, Erica (Connelly) who left him three years ago and is re-married. William is convinced that she will one day return. Samantha hasn’t spoken with her mother for over a year, fueled by the sadness her father feels. Things aren’t helped by the fact that William will occasionally drop by Erica’s house and peer into the windows. When he sees her fighting with her new husband he’s emboldened, but then quickly deflated as they make up and embrace. Rusty is looking for love, Samantha is dead set on avoiding it. And William is willing to wait for it to return.

A little heavy-handed at times, “Stuck in Love” is saved from the maudlin pile by its stellar cast. Kinnear is quite vulnerable here, a man who lost his will for writing when his wife left. As his children, Wolfe and Collins play well off of each other like water and oil, though they have more in than they may want to admit. Both discover, in their own ways, their first loves, and they are changed by the experiences. As Kate, the object of Rusty’s affection, Liana Liberato is often heartbreaking. Her life hasn’t been easy and it’s hard for her to accept the fact that Rusty loves her for HER, not for the ulterior motives others have in the past. Samantha meets a fellow member of one of her writing classes, Louis (Logan Lerman). He is the opposite of Samantha, or so she thinks. But he eventually finds a way to get under the armor she’s put up around her.

Two subplots throw the film off track. One, concerning Louis’ ill mother, feels like an afterthought and really just a way to get the young couple to connect. Another introduces us to Kristen Bell as a married woman who stops by periodically for some “friends with benefits” action with William. I’m sure if this had been a book these points may have been expounded on but, as they are, they’re really mild interruptions of the main story. Maybe Boone will take the time and publish it some day.