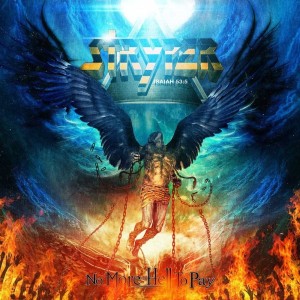 Dust off those bibles and stretch out that black and yellow spandex because the boys in Stryper are back with a brand new album titled “No More Hell to Pay”. The new album which is the bands 9th studio album was produced by Stryper front man Michael Sweet and features 12 hard rocking, progressive tracks that are being released via Frontier Records.

When bands from the era of hyper color shirts, stone washed jeans and aqua net are still rocking some 30 years later I have to give it to them. With Stryper they are not only still rocking but they are putting out new material that pretty killer. Vocalist Michael Sweet has only gotten better with age and this is proven on tracks like “Saved by Love” and “Legacy” which features several Rob Halford type screams which could rival that of the man himself. Guitarist Oz Fox does a great job laying down some pretty intricate solos which only add to the progressive rock feel of the album. For those wanting something a little more familiar included on the album is a great updated rendition of the song “Jesus Is Just Alright” which was originally written by Arthur Reid Reynolds and made famous by The Byrds.

Having grown up in the 1980’s I am a sucker for anything that originated from that time period. Good or bad it doesn’t matter I still have to check it out. I was pleasantly surprised during my review of “No More Hell to Pay” because it had elements of a vintage 80’s record but was infused with modern day styling which I found quite appealing. Yes I could have done without some of the over the top biblical references but when you are listening to a band who used to throw out bibles during their live stage shows then it is to be expected somewhat. If you find yourself trolling the isles of your local record store (if it hasn’t closed down yet) or are surfing through iTunes and you want checkout a solid rock record then give the latest from Stryper a listen.