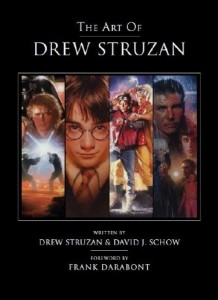 If you are reading this review, you shouldn’t be…simply go out and buy this book. This is one of the best “The Art of” book that I have ever read. He is the artist behind some of the most iconic posters of our time. He is also well known for his classic work with both George Lucas and Steven Spielberg. Just to name a few of the amazing posters he has done before we go into it more below, “Back to the Future”, “Jurassic Park” and “Indiana Jones” are just a few. We had the privilege of interviewing Drew Struzan in person for this book and he is just such an amazing guy and a legend of his time. You can check out the interview here.

The book starts of with of course one of my favorite “Raiders of the Lost Ark”. What I also have mentioned yet is that this isn’t just poster book. Drew has included personal recollections from each poster and its creation process. There is no empty space on these pages. “John Carpenter’s The Thing” is one of my favorite posters ever and Drew gives some really great background on the poster. “Back to the Future” series gets some serious attention in this book as well provided dozens of variant posters at different stages of completion. Honestly a dream for movie fans to see this work. “Harry Potter and the Sorcerer’s Stone” and “Harry Potter and the Chamber of Secrets” also gets an amazing send off from Drew. One of my recent favorites of his posters though has to be “Hellboy”. It is such an amazing poster that Drew has even done a step-by-step DVD showcasing his work on this poster. Obviously I only scratched the surface on this book and I didn’t cover everything, it will just have to make you go and find out for yourself what other greats are included in here.

I have seen many poster books before but this is definitely something more than that for sure. It takes a look into Struzan’s poster artwork upfront but then goes down in depth into his process. Each poster that is included also with alternate and/or partial finished pieces of the same art. The foreword alone is worth the purchase of the book by Frank Darabont. It is a great send off to Drew Struzan and their collaboration. Drew worked on the following of Darabont’s films including “The Mist”, “The Green Mile” and “The Shawshank Redemption”. Poster and movie fans a lot this is a MUST purchase. If you own it already go out and buy one for your friends. 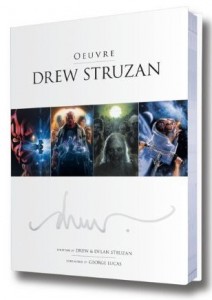 If you aren’t aware of the work Drew Struzan, first I suggest picked last year amazing release “The Art of Drew Struzan”. Drew Struzan has created artwork for over 150 movie posters, including “Star Wars”, Indiana Jones” and “Harry Potter”. This book features an additional 250 pieces of art and doesn’t just keep it to movie posters either. It covers movies, record albums, books, comics, stamps and even trading cards. It includes right up-to-date pieces of Struzan’s work including “Walking Dead” and “Cowboys and Aliens” but also of course some of the classics. What I like most about this release specifically is that it includes quite a bit of material that has never been published prior, including some of his personal work.

I feel that this book is a little more personal than “The Art of Drew Struzan”. This one really delves into the man, Drew Struzan, and his work. The first section deals with “Music” ranging from Alice Cooper to “Beauty and the Beast” and the works of John Williams. Next we comes to movies which is my personally favorite section. What I like most is the Struzan did a lot of variant posters that were never used like “Cowboys and Aliens”, since it shows the alien in the poster (sort of). I think it would have made for much better poster. Being a “Star Wars” geek though, the different drawings from that series are truly my favorite pieces of work. What makes this book unique is the commercial and personal works included ranging from portraits of the late Princess Diane to MAD Magazines to female portraits and abstracts. You can really see his range of work and explores some of the not so well known drawings.  This book covers it all.

The book is co-authored by Drew’s wife Dylan and they have been married for over 40 years, which is huge. Also you have to understand if you are married, a wife has a huge influences on their spouses work and I am sure she had her had in many of his famous works. The foreword is done by Drew’s longtime friend and collaborator George Lucas…that’s right THE George Lucas. He really gives a great send off for Struzan’s work and this book. Overall if you follow Drew’s work and are a fan of REAL posters not today’s photoshopped terrors than this is a no-brainer.