From the very earliest movies, people have been obsessed with the concept of artificial intelligence, or AI. It’s even showed up in movies reaching back as far as the 1920s. But what are the smartest AI in the most prominent movies across the decades? This ranking of AI in movies will give you more information about all the movie AI programs with superhuman levels of intelligence.

This is potentially one of the most well-known superhuman AI programs in a movie. HAL 9000 has speech recognition, facial recognition, natural language processing, lip reading, art appreciation, and the ability to interpret emotions and reason. The AI’s iconic “I’m sorry, Dave, I’m afraid I can’t do that” is a widely-recognized and widely-parodied example of true artificial intelligence.

Marvin the Paranoid Android – Hitchhiker’s Guide to the Galaxy

Modeled on literary depressives, Marvin the Paranoid Android is a charmingly depressed robot assistant. Though Hitchhiker’s Guide to the Galaxy started as a radio program in the 1970s, its status as a cult classic allowed for a movie release in 2005. But don’t be fooled by his depressing tone of voice; he states that he has a brain the size of a planet, making him 50,000 times smarter than a human.

This is another incredibly iconic evil superhuman AI. Skynet is one of the most definitively evil AI programs in movies, as its stated goal is to try and kill all of humanity. It’s also clearly very powerful, as it’s able to time travel, command armies, and develop nuclear weapons. However, as a true testament to the growth of technology, Skynet actually runs slower than modern supercomputers.

Data is one of the most competent AI programs on the list, and that’s partially because he’s such a likeable character. His super-strength and encyclopedic memory are bolstered by his 100,000 terabytes of memory and mentioned ability to compute sixty trillion operations per second. That makes him the perfect choice for the second officer of the main ship.

As a childlike humanoid with extremely realistic visuals, David’s entire character arc is that although he’s a manufactured android, he’s programmed to love like a child. It’s an intriguing concept inspired by Pinocchio. But with intelligent behavioral circuits and neuron sequencing technology, he’s far from childlike in intelligence.

Isaac Asimov’s short stories, which created the base for much of modern science fiction, inspired this main operating core, which is extremely confident in its logical capabilities. It uses its processing speed of .003 seconds to attempt to enslave all of mankind.

It’s no surprise that AUTO is a hyper-intelligent and evil AI; it was inspired largely by HAL 9000. Its self-driving ability through light speed makes it easy for the AI to do what it wants in the movie. Plus, it’s voiced by MacInTalk, Apple’s text-to-speech program, to give it a voice that falls squarely in the uncanny valley.

Her is an intriguing movie about a man who falls in love with an operating system. Although Samantha’s behavior is closer to an adult’s behavior than a hyper-intelligent AI, the character presented throughout the movie make it clear that she’s upgraded to a much higher form of operation that allows her to form true relationships.

There are plenty of incredibly intelligent AI programs in movies, and there are bound to be more in future science fiction movies as well. Whether they’re evil, good, or somewhere in between, it’s easy to see why people love these intriguingly thoughtful beings. 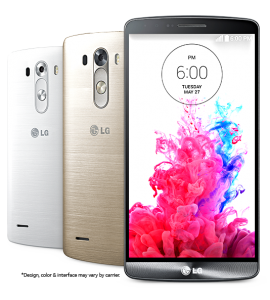 When the very first iPhone came out, I traded in my old flip phone for what at the time was the best smart phone on the market. It stood the best for quite a while in my opinion. After the iPhone 4, I lost interest in the future development of Apple and its product. I decided to cross over to the dark side as iPhone users says and go the Android route with the Samsung Galaxy S4. WOW! Was my world expanded! Convinced that I would never switch back to iPhone again, I decided to see what else is out there.

In this article, I will be discussing three new smartphones besides the Samsung Galaxy and the iPhone, which always thought to be the two strongest options in the market. Are phones even phones anymore…the phone part is the bonus with these devices. What is more important these days to be is the speed, the size and most importantly the apps! The first of the three is the LG G3, which I feel is no question the strongest of the bunch.

This is a phone, I would honestly switch over to if I had the option. The device comes with a 5.5-inch Quad HD IPS display. I am a big picture guy, so the camera is very important. This phone is equipped with a 13MP ultra fast laser auto focus camera. This is a big improvement over the Samsung Galaxy S4 camera for sure! I felt that I always got blurry photos but this comes with Optical Image Stabilization, which reduces blurry photos that result from shaking.

The carrier we tested this phone on was with Verizon. With that the LG G3 comes XLTE Ready, which is a good feature and let’s you take advantage of the latest advancement to America’s largest and most reliable 4G LTE network. It is double the 4G LTE bandwidth in cities coast to coast, which allows you to do much more with your smart device. The device also comes with a Smart Keyboard as well as your own Virtual Personal Assistant. It’s not Siri, I mean what is, but it is quite snazzy.

Finally since I am an IT guy, I can’t help but to throw some tech specs in here. The OS come with Android OS, v4.4.2 (KitKat). The Chipset includes is a Qualcomm MSM8975AC Snapdragon 801 with a CPU of Quad-core 2.5 GHz Krait 400. Th screen is made up of Corning Gorilla Glass 3. Most important, and something an iPhone can not do at all is, expandable memory, this includes the option to expand with a microSD card, up to 128 GB, while the internal options are 16 GB, 2 GB RAM / 32 GB, 3 GB RAM. My only major complaint is the volume button and main button are located on the back. This is annoying at first but you get used to it. Overall a pretty rad phone!

Next up is the Nokia Lumia 1520, which last month was made available at AT&T in matte green! This phone is definitely big and quite bold, especially with that green back cover. The Lumia 1520 also offers the latest Windows Phone 8.1 software update. That is a great thing…if you like Windows. I use Windows 8 for work, so I know how to work it but it honestly fails to impress on the phone. The app store is also terrible. There is a big issue for me since I rely on all my apps to run my day and a bunch of them are MIA.

I see the Lumia 1520 working well with the trendy kids of today looking to have the biggest phone with all the good gadgets. It is a college phone. I wouldn’t recommend this phone for the general office environment for sure. The phone does come with Microsoft Office built in, so you are able to access Microsoft Word, Excel etc. I knew that this phone was going to be the biggest challenge to impress me and I really wasn’t blown away.

The Lumia 1520 does have a wicked camera, which is the best of the bunch. The 20MP camera is quite the powerhouse and using Zeiss optics, it is one of the most sensitive and powerful cameras included in recent smartphones. Though, with my smartphone I need more than just a strong camera to sell me.

Though camera aside when comes to technical it falls behind the top the LG G3. The screen is only Corning Gorilla Glass 2 for its six-inch HD display. It can only be upgraded to up to 64 GB with an additional of an microSD. The internal options are different also giving options of 16 GB (RM-940 only) and 32 GB, 2 GB RAM. Lastly, the chipset is Qualcomm MSM8974 Snapdragon 800 and the CPU is Quad-core 2.2 GHz Krait 400. I would just expect more from such a big phone.

Last one of the bunch this time around is the HTC One (M8) from Sprint. This was a decent phone but not a fan of the service from Sprint at all when the other phones were sporting 4G LTE, this phone barely stayed at 3G, when it wasn’t saying it was roaming. Right away, I was turned off. It also features the worst camera, I have seen on the smart phone in today’s market. There is only a 5MP camera on the front camera, which is laughable in today’s market of 13MP and 20MP camera.

So if you read all the above, you might agree with me that the LG G3 is the obvious winner of the trio of alternative smart phones. The Nokia Lumia 1520 has the best camera but suffers from its Windows OS and a terrible lack of apps in their store. The HTC One is a decent phone also but just lacks any wow features that really drew me in despite having terrible service from Sprint. Hopefully next time, we will be able to feature the new Amazon Fire Smartphone and the iPhone 6 in our next Smartphone comparison.