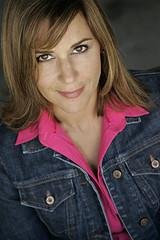 Maggie Wagner is playing the role of Karen Harrison in the play “Right on Target”, which premieres at this year’s New York International Fringe Festival. She is also co-starring with John Schneider in “Return of the Killer Shrews”. Media Mikes had a chance to chat about these projects and what else she has planned next.

Mike Gencarelli: What drew you to audition for the play “Right on Target”
Maggie Wagner: I got a phone call from one of the producers who’s a friend of mine. He was working on a play for the Fringe Festival and he had a part in it that he thought I would be good for. He wanted me to meet Gary Morgenstein who was also going to be working on the play. Gary thought I was the right person for the role also. I then auditioned over Skype for director Noemi De Lapunte. She liked me and everything went from there.

MG: Tell us about your character, Karen Harrison, in the play?
MW: I play a character by the name of Karen Harrison. She is a very liberal, hippy, jewelry maker who is married to a very conservative, right wing African American. We are complete opposites.

MG: The play is premiering at the New York International Fringe Festival, what can we expect next?
MW: I have never been to the festival. I do know that two plays or more have gone on to Broadway. One of those was “Urine Town”. This festival is a starting ground for shows and it’s a mixed bag so you never know what you are going to get.

MG: How would you compare working in theater to working in film or television?
MW: It’s all about truth and reality for me. I try to do everything the same. They are different mediums but I try to be as real as possible. You try to bring in your own reality. There is a lot more projecting when it comes to stage work but I love being on stage and hearing the laughter from the crowds.

MG: Is there a specific genre where you feel most comfortable?
MW: I love everything. I like anything that involves me getting paid and being able to show my strongest points. (Laughs)

MG: How did you get involved with “Return of the Killer Shrews”?
MW: The writer of the sequel Steven Latshaw happens to be a friend of mine. The original actress who was cast became pregnant and they needed someone for the role of Stella. They were looking for someone with a biting wit similar to Fran Drescher. I guess I am the low budget equivalent to what they were looking for. (Laughs) They called and asked me if I wanted to be in the film and I just went and did it. There was really no audition process.

MG: Did you have any problems working with the digital effects in the film?
MW: Not really. They kind of give you the idea of where things are and you just sort of go from there. It was great working with John Schneider. We are sort of like the odd couple.

MG: What other projects do you have coming up?
MW: I just finished a film titled “Hate Crime”. The film was directed by James Cullen Bressack and the film is an experimental horror film. It is a found footage film where a family is attacked by some intruders. There is a lot of special effects things going on. I hear it is pretty gruesome to watch.