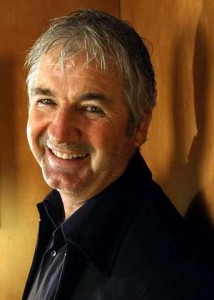 Australian actor John Jarratt started his acting career in the mid 1970’s and has appeared in dozens of films and television series. One of John’s more recent roles is that of a crazed serial killer in the film “Shiver” which also stars Casper Van Dien and Danielle Harris. Media Mikes spoke with John recently about the film and what drew him to the role.

Adam Lawton: Can you tell us about your new film “Shiver”?
John Jarratt: It’s a horror genre film about an impotent nerdy, creepy, middle aged, middle American guy who has a love/hate relationship with women. He seems to love them more after he kills them. However, he comes across one who vehemently doesn’t want to die.

AL: What was it that interested you in the role?
JJ: There are three things that make a film worth doing, the script, the script and the script. Also, being an extraverted Australian, working class guy, I was excited to play this type of character. Having a go at an American accent was a great challenge which I thoroughly enjoyed.

AL: Being that this is a very creepy role what type of preparation or mindset did you have to get in to in order to play this character?
JJ: I tried to stay alone with it because there are a lot of lines. I would take very long walks on a regular basis and mumble lines to myself through the streets of Portland, staying in the zone. I had the script for a year or so before filming, so I had plenty of time to work on the character. I jutted my teeth out a little and tried to play him slightly buck toothed. I made the voice a little nasally and found a nerdy sound that suited Rude. I also I gave him a back story.

AL: For you what was the hardest part of the shoot?
JJ: The snow and the mud! Bloody Portland in winter, you can have it. “It’s beautiful in the summer”, was the catch cry.

AL: Do you have any upcoming projects that you would like to mention?
JJ: Yes, “Wolf Creek 2” is being released in Australia on February 20th and I am really looking forward to that. I am working on a film called “Defence” in November and another called “StalkHer” starting in January.