SyFy, the infamous TV channel that gave us the monumental TV adaptation of Frank Herbert’s Dune / Dune Messiah / Children of Dune and the best SF series of all time, Battlestar Galactica, has failed to live up to our expectations ever since. Sanctuary and Warehouse 13 were nice shows to watch, albeit not as memorable as they should have been, and Eureka also had its ups and downs, although it was a good show at the end of the day. But while other channels gave us Fringe, The Walking Dead and Game of Thrones, SyFy was stuck at a much lower level.

The channel has promised five shows to lure back science fiction hungry audiences. Helix was a good one in the first season, but the second one was by far not as memorable. I haven’t even seen the last two episodes, choosing to play royal vegas online casino games instead. 12 Monkeys was a nice idea, but lacking the “wow” factor Terry Gilliam’s original had. The Expanse looks like something of value, but it will be a mini-series (just like Galactica was at the beginning), and it has to be very (I mean VERY) good to be picked up as a series. Childhood’s End may end up to be a treat for lovers of classic science fiction, but judging by the trailer it will only be “inspired by” the original, making it a more entertaining and possibly less philosophical than the book.

Until these two major pieces of work will be released, the channel is trying to fill the gap with two TV series which might sometime in the future become great works, but right now they are just a handful of space operas perfect for munching popcorn and downing cold ones in the evening: Dark Matter and Killjoys.

Having seen the first three episodes of Dark Matter, the only thing I have to say is “been there, done that” countless times in the past. The show has two big names behind it – Joseph Mallozzi and Paul Mullie, who gave us Stargate and Stargate: Atlantis – so it might become something of value later on. But right now it is just a collection of cliches that fail to engage, presenting its viewers with mysteries that they might not even be curious to uncover.

Killjoys has an interesting background, and has the potential to become the next Farscape, but until now it lacks that certain “je ne sais quois” that would pin me in front of the screen. It has quite a bit of action and suspense, and dark secrets in the past of one of the lead characters’ past, but so far nothing that I would truly call original. It’s like the fifth season of Andromeda mixed with a dash of Firefly (not enough by far), and has a lot of “low budget” written all over its visuals. It might become a great show if it lives long enough, but right now it’s just another lightweight summer space opera.

Hopefully this is not the best SyFy can do, otherwise us, in search of quality science fiction on TV, are doomed. 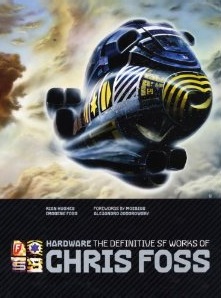 When it comes to anything science fiction…sign me up. I have always been a fan of the genre ever since my family used to take me to the Sci-Fi Diner in MGM Studios (now Hollywood Studios) in Walt Disney World. There was always just something about the out-of-this-world design that really drew me in. Chris Foss is known for his work in this area with creating some of our times “coolest” sci-fi art.  The book is a beautiful visual journey through his work. Though it if you are looking for supporting text to provide insight into each piece you will be disappointed.

Foss’s unique and groundbreaking science ﬁction art dramatically raises the bar in the 70’s-80’s. It is known for its realism and invention mixed with his science fiction twist. The art you will find within this definitive work ranging from his trademark battle-weary spacecraft to his dramatic alien landscapes. If you ever read any science fiction novels in the 70’s-80’s, then you are familiar with his novel artwork for sure. I just love his ideas and his creations. I just would have like more background on each image.

This volume features Foss’ work for books by Isaac Asimov, Doc Smith, Arthur C. Clarke, A. E. van Vogt and Philip K. Dick, and ﬁlm design for Ridley Scott and Stanley Kubrick. Titan Books did a great job of releasing a very sweet looking book overall. The images on the pages are so crisp and colorful that it literally draws you to the page. If you are fan of Foss, you will enjoy being able to view many rare and classic images that have never been seen or reprinted before.