For more info or to buy now, go to http://bit.ly/Turbo_BluRayComboTR 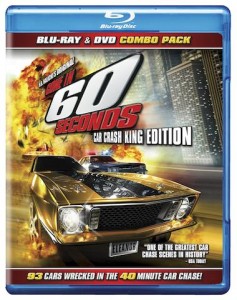 Many probably don’t know but the 2000 action film, “Gone in 60 Seconds” with Nicolas Cage & Angelina Jolie, was actually a remake.  H.B. Halicki was the man behind the original 1974 “Gone in 60 Seconds”.  This film gave birth to the car-chase film genre and stars Eleanor, the only Ford Mustang in history to receive starring credit in a movie! This movie also prides itself on wrecking over 93 cars within it’s extremely long 40 minute chase-scene!  This film is the real deal, no CGI, when cars were crashed it was real.  If you are a car buff, then you have to check out the amazing driving and stunts in this film.

Official Synopsis: THE ASSIGNMENT: to steal 48 muscle and exotic cars! THE CHALLENGE: avoid getting caught! ELEANOR: She’s one fast and furious Ford Fastback Mustang– a superhero of car chases…buckle-up as she slams through 5 cities, cops after cops can’t touch her…wrecking over 93 cars in Eleanor’s 40 minute Chase-Scene! It slams you on a full-throttle ride you’ll never forget!

H.B. Halicki’s Original Gone in 60 Seconds comes in a sweet Blu-Ray/DVD Combo Pack. The film is restored in widescreen and digitally remastered in 5.1 Dolby & DTS Surround Sound. This film has never looked or sounded better. It also comes packs with a great collection of bonus features. “The personal life and times of H.B. “Toby” Halicki, the Car Crash King” looks into the creators legacy. There is an interview with Denice Halicki on the set of her filming the 2000 Remake of Gone in 60 Seconds, which starred Nicolas Cage & Angelina Jolie. There is a rare interview with the “Father of the Ford Mustang,” Lee Iacocca. If you are a commentary, there is a track from Jack Vacek (Director of Photography) & Warner Leighton (Editor). Lastly there are three featurettes “Cut to the Chase” including information about the real accidents caught on film!