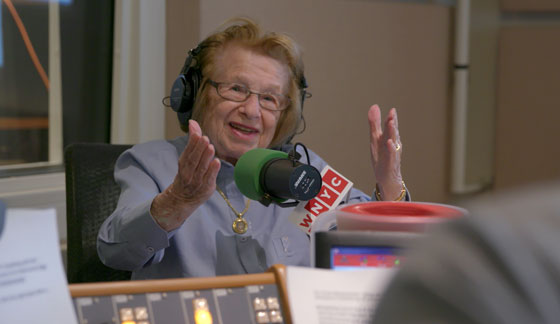 Dr. Ruth Westheimer–or as the world knows her simply “Dr.Ruth”–is an icon of modern pop culture both for broadening the discussion of sexuality in the mainstream as well as her larger than life personality. At just 4’7″, the diminutive German radiates a warmth and sense of humor that easily draws people to share their deepest personal concerns with her. Dr. Ruth has been on the world’s radar since her debut radio show “Sexually Speaking” in 1980 but at ninety years old, there is so much more of her story to be told. Fortunately for film goers, director Ryan White has chosen to take a thorough look into this extraordinary woman’s history. This internationally loved figure survived the Holocaust and time as a sniper in war-torn Jerusalem all before she reached Ellis Island to begin life in America as a single mother at a time when that was far from the norm. And then she took the media by storm. The documentary itself is as accessible and often light-hearted as its titular sex therapist while not shying away from her tragic beginnings.

Dr. Ruth was born in 1928 as Karola Ruth Siegel to Orthodox Jewish parents in Germany. As WWII was brewing, Karola saw her father arrested and she was sent away by her grandmother as part of the Kindertransport to an orphanage in Switzerland. The small Karola did not know she would not see her parents again but she kept up writing letters with them as long as they could in addition to her detailed journals. Dr. Ruth’s own records are a boon to this doc and her diligence in conserving them is rewarded with some lovely animation work that White introduces to bridge the time before she came to the public eye (though White’s choice of an unaccented young American woman reading her diaries is at times jarring). The film also has a nice blend of her home movies chronicling her life as she finally reached America.

There’s no doubt that the strength of this documentary is owed to its magnetic subject. Watching Dr. Ruth query an Amazon Alexa in her uber-thick accent (and it takes a few tries for the electronic helper!) is a pure delight. Fortunately for White, Dr. Ruth also surrounds herself with equally well-spoken company. Her two grown children, her quartet of grandkids and even her first “boyfriend”, a fellow Holocaust survivor, are welcome additions to rounding out her life off-camera. Finally and naturally, White doesn’t skimp on emphasizing her media impact. There’s highlights from the times she embraced a certain kitsch take on her pop persona–I am guilty of first being aware of her as a kid due to that cheesy ‘sex-noises’ Herbal Essences ad from the 90s–as well as the more critical role she played in the conversation during the AIDs crisis. There is so much of the human experience packed into Dr. Ruth’s tiny frame that this documentary is an embarrassment of riches.

Ask Dr. Ruth has its New York premiere tonight as part of the 2019 Tribeca Film Festival. Fest screenings will be followed by a limited theatrical release on May 3rd and will debut on Hulu on June 1st.