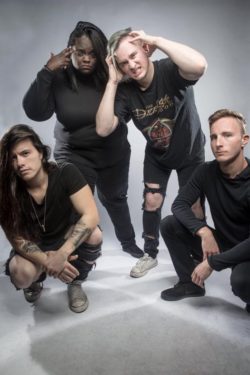 The Atlanta, GA based Nu-Metalcore band Tetrarch are set to release a brand new full-length album on September 29th titled “Freak”. The band is currently out on the road with Devil Driver and Media Mikes had the chance to speak with guitarist Diamond Rowe about the creation of new album, the bands plans for the remainder of 2017 and got her thoughts about being a female guitarist in the heavy metal scene.

Adam Lawton: Can you give us some background on the formation of the band?

Diamond Rowe: I started Tetrarch with my best friend while we were still in high school. It took us a little while to hone our sound and really figure out what it was we were going for but things came together and from there we just started touring. Our sound is a mixture of early Nu-Metal with a few modern elements.

AL: Did/Do you ever have any reservations about being a female guitarist in a scene that is predominantly men?

DR: When I started playing guitar and playing in bands I never honestly thought about the fact that I was a female playing metal music. I didn’t see it as anything really different. It wasn’t until people started bringing it to my attention that I noticed this was something different. I was never nervous or hand any reservations as I just did what I could to make the band work and get better at guitar. With they’re not being a lot of females out there playing metal it’s kind of cool to be somewhat influential. We are starting to see a few more females come up in the metal world however there still aren’t a lot of African-American females performing in bands. Being a female metal guitarist I think people might expect you to not be that good (Laughs) so I just go out there and really try to be the best as I can at my instrument.

AL: Can you tell us about the band’s new album “Freak”?

DR: We had never done a full-length release prior to this record. In this day and age it’s not really necessary to release more than one or two songs at a time via an EP. We wanted to do something different this time so we could give people more of who we are. As we were writing I noticed we were getting a lot of influence from more than just metal music and that there were quite a few different music elements present. Lyrically a lot of the subject matter is about weird things and/or embracing differences. We started looking at being weird in a positive way as opposed to negatively. The title “Freak” really came out of that approach.

AL: How did the bands creative process work this time around and, what was it like working with Producer Dave Otera?

DR: Josh Fore and I the predominant writers in the group. We live together so it seems we are always working on something. One of us might start out with a riff and then the other builds on or vice versa. Once we have the basics of a full song will take it to the other guys and they will put their spin on it. Dave actually mixed one of our first EP’s. People had said they really liked the sound so we knew he was someone we wanted to work with again. When it came time to do this record he was someone who came up naturally during the selection process of where to go. Dave is a big name in the death metal scene so working with him certainly brought a new/different perspective to things. Dave was excited to work with the band as we were something a little different for him and things went well. Dave is very easy to work with and made things comfortable.

AL: The band is out until till late September, What do you guys have planned for the rest of the year and going forward in to 2018?

DR: We will be out on this run of shows for a couple more weeks with Devil Driver. After that we return home for a few days and then we head out with Devil Driver for a few west coast dates. We also will be shooting a couple videos in that time as well. The album comes out September 29th and we will be doing a festival show in Texas in November and we might possibly do a short run shows towards the end of November. Once the New Year starts we will be out there in full force pushing this album.

For more info on Tetrarch you can visit their official website at www.Tetrarchmusic.com