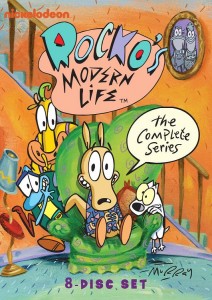 I have to admit, I was a huge fan of “Rocko’s Modern Life” in the early/mid 90’s.  It went along well with Nickelodeon’s “Ren and Stimpy”, which I was also a big fan of.  It has been at least 15 years since I last saw “Rocko’s Modern Life” and it still holds up. This show has become a cult classic among fans since its original airing. There is really not many other show like this on television today, maybe besides “Adventure Time” or Regular Show”.  It is over-the-top, raunchy and very funny.  Sure maybe it is a packs a little bit of off-beat humor with some of the jokes but as an adult now, I am able to catch one to much more then when I was a kid.  Shout! Factory has been releasing the seasons individually over the years but this is the first time that the complete series is available to own on DVD.  It is well-worth the purchase if you are a fan of this show.

What more can you ask for here! This complete series comes with all four seasons of the show including 52 episodes! I am shocked to realize that there were only 52 episodes, I thought this show was on forever. This release also includes some fantastic original art by the show’s creator Joe Murray! The cover is a work of art, as is the inside insert, which is never usually given the time of day. You can tell that there was a lot of love that went into this release. Carlos Alazraqui, who was the voice of Rocko, Spunky and many more has since went on to notable roles like Deputy James Garcia in “Reno 911”. Tom Kenny who voiced Heffer Wolfe went on to voice, even to today, “Spongebob Squarepants”. The creator, Joel Murray, really has a certain vision for this show and maybe it was a little a head of its time but this show is a real hoot! Get it?! Joel also went on to work on similar looking shows with “Camp Lazlo” and “Frog in a Suit”.

This 8 disc set looks great for a show that is celebrating its 20th anniversary this year. The show aired from 1993-1996, so I am not sure why Shout! isn’t pushing the fact of the show’s anniversary. Either way, it has been a real pleasure revisiting this show after all these years and it does nothing short of entertaining. The episodes are presented in their original full screen presentation. I am not sure if Shout! Factory has done anything with these episodes but they look decent for a DVD release. 20 years has been kind to this show and it has never looks better. The colors are sharp and the audio track works well with the underscore and the Rocko screaming “SPUUUUUUNKY”.

This release from Shout! Factory comes with some very impressive special features specifically for this complete series. First up we have a “Wacky Kelly” Live 2012 with Joe Murray and the Cast. This extra is a riot and just shows that there are still so many fans of this great show out there still today. “Behind-The-Characters Shorts” is a fun look into the mind of our favorite characters from the show. Next up, there are some select scene commentary tracks throughout season three by the creator himself, Joe Murray. I highly recommend these! Lastly there is the original pilot version of “Trash-O-Madness” included on this release. If you are a fan of this series, you should be left very satisfied with this release. Heffer was right…it is a hoot!