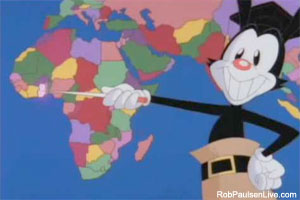 Media Mikes was lucky enough to catch up with emmy-winning voice actor Rob Paulsen on the floor of NYCC this past Friday. Paulsen can currently be heard in Nickelodeon’s new Teenage Mutant Ninja Turtles as Donatello alongside Sean Astin’s Raphael. However he was equally ready to talk about one of his most iconic roles, Yakko Warner, of “Animaniacs”.

Children of the 90s will remember the impressive and catchy “Yakko’s World” in which Paulsen sang the names of the nations of the world. As political lines have shifted since 1993 when the song first aired, Paulsen revealed that he and the writer are hoping to be back to get an updated version recorded:

“I don’t know if I’m recording it for sure, Randy Rogel who wrote Yakko’s World–and all the other cool stuff on Animaniacs, by and large–told me a couple weeks ago that he updated Yakko’s World to reflect the Soviet Union no longer being around and all the ‘-stans’. Uzebekistan, Kazahkstan, Tajikastan…so yea, apparently there is a new, updated version of Yakko’s World and I hope that we can record it one day and release it!”