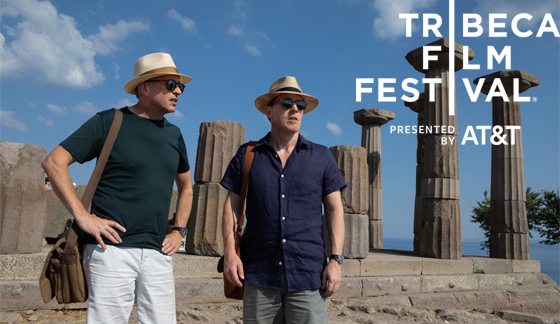 Through no fault of its own, The Trip to Greece is arriving on VOD today with some extra baggage. Seeing as this release comes at a time when the world doesn’t know how and when we might resume the kind of care free international tourism that stars Steve Coogan and Rob Brydon enjoy, it’s hard to judge how this film might hit you. Is armchair tourism at this juncture escapism or masochism? At this point in the series, given this is the fourth time around with this specific formula, that might be the only factor in your decision making. As with their first three trips–starting in England the duo then hit Italy and Spain–the vistas are gorgeous, the food looks delicious and the impressions are plentiful. What sets this one apart, fittingly for ancient Greece, is the injection of some tragedy within the film’s “plot” separate from the context of its release. The result of this turn is a film that is more an admirable finale than the hilarious joyrides that its predecessors were.

The setup is slim, as always, with the comedians ostensibly working on some article while retracing the trail covered in The Odyssey from modern day Turkey to Ithaca. Ten years of Odyssey condensed into six days of jet setting. The structure sets their agenda but then Brydon and Coogan’s conversations go off the rails as needed. This time around, Coogan has recently received dramatic accolades for his portrayal of Stan Laurel in Stan & Ollie and a lot of their comedic tension comes from Coogan trying to emphasize his newly minted dramatic chops while Brydon firmly still categorizes his buddy as a comedian. If there were an Olympics for negging, these two would surely medal. The guys are hilarious at oneupmanship whether it’s picking up on a Mick Jagger impression and doing their own take or attempting to turn the the mundanity of a restaurant check into a game show round. In these sequences this series always hits its stride and credit must go to director Michael Winterbottom and his editor Marc Ricardson for often wringing another laugh out of a moment by just cutting on the right beat.

The film does do that shift for the dramatic though by adding in ominous black and white dream sequences rooted in Greek myth for Coogan and introducing a family health crisis as well. I haven’t been able to suss out if that part was based on something in Coogan’s actual life or entirely fabricated for the film but if the latter, it seems an odd choice. At one point they also take a detour to a refugee camp after coming across a former colleague of Coogan’s who’s based there. While it is, as I said above, admirable that this series of extreme-first-world tourism actually takes a moment to observe the realities of a host country, it comes off more as momentary lip service rather than genuine reflection. Eventually the back home problem for Coogan split the comedic duo apart for the remainder of the film much to its detriment. Where the pair end up does have the air of finality, which this installment supposedly is, so I understand the choice. Overall I enjoyed Brydon and Coogan’s competitive company as I always have, just wish that this finale could have focused more on the series’ strengths as it headed off into the sunset.

Note: The Trip To Greece was due to make its North American premiere as part of the 2020 Tribeca Film Festival’s “Spotlight Narrative” slate. Though the 2020 Festival was officially postponed due to ongoing pandemic precautions, online screeners and the fest’s press library mean we can still offer coverage of this year’s selections while looking forward to getting back to the fest in the future!