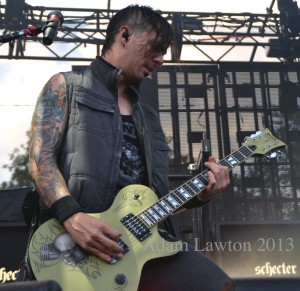 Jerry Horton is the guitarist for the multi-platinum rock group Papa Roach. The group’s latest release “The Connection” has been tearing up the rock charts and Media Mikes caught up with Jerry recently to discuss the bands career at the Big Flats, NY stop of the Carnival of Madness tour which along with Papa Roach features Skillet and Shinedown.

Adam Lawton: Can you tell us about the bands decision to tour as a package as opposed to a solo headlining run?
Jerry Horton: I think a lot of it had to do with the fact that last year we were supposed to be part of a package tour however due to Jacoby’s vocal problem we had to cancel those shows. We were trying to figure out what to do this year tour wise and the guys from Shinedown hit us up. We have toured with them before and it’s always been a great time so that’s what we decided to do.

AL: Having not toured immediately upon the latest albums release how has the reception been towards the new material on this tour run?
JH: It’s been really good. We have had quite a few people up front just singing along to the new stuff. That’s not something we expect especially from say a Shinedown crowd. Not to say there isn’t cross pollination of our fans and Shinedown fans happening but with them being the headliner you don’t expect to see people singing along to some of our heaviest songs. Things have been great on the tour and each night we flip flop sets with Skillet so some nights we play earlier and other nights we have the later slot. The challenge of getting everyone up out of their seats is one we enjoy and we have had a lot of people up and dancing this time out.

AL: Having a career that is going on 20 years now what do you feel has been the
bands biggest progression over the course of that time?
JH: I would have to say that probably our biggest change happened just recently. We introduced some more electronic elements to our sound. We had a little bit here and there in the past like on “Getting Away with Murder” but it was never really as much in the forefront as it is on this record. We wanted to do that in a way that wouldn’t take away from the rock element of the band. When we write and record we will do the main guitar part and then layer over the top of that. With the electronic sounds we want those to help people differentiate between the various parts of the songs. There are a lot more textures going on in the newer material however I wanted the beats to resemble those from our earlier records.

AL: From a tonal stand point do you feel the band’s sound has changed at all?
JH: I wouldn’t say it has changed so much. We have used different amps from time to time but for our main sound whether I am using a Marshall, a Bogner or a Boogie I have a certain frequency range that I like my sound to sit in. Whatever amp I am using will generally fit in there. You can kind of hear some differences if you go back to the “Infest” album and compare it to “The Connection”. There is a little difference but I generally don’t get down to the freakishly specific settings. I go a lot by ear and how it meshes with the bass. Tobin acts like a second guitar player with his playing style so at times the tones have to be similar and distinct even while we are playing lines that may be similar.

AL: Over time has your live tone and recording tone started to mimic one another or have they stayed pretty separate?
JH: On the last record we used Bogner amps but live I am currently using the Axe Effects unit. I have a similar tone but it’s not exactly a Bogner amp. There are some concessions I am willing to make when it comes to touring and playing live. It’s not only a space issue but there are things like weight and shipping that we have to take in to consideration. The Axe unit comes within I would say between 90-95% of my studio sound. A tone purist would take a look at my whole rig and probably just shake his head in disappointment.

AL: Have there been any talks yet of starting work on a new album?
JH: We have started thinking about it. Ideas have started floating around but we don’t have specific songs finished just yet. I know Jacoby has lyric ideas and we have an idea as to how we want the album to sound. There are a lot of cool things that we are tossing around. I know Tobin has two or three songs in the works and we are really stoked about those. We are still just in the beginning stages. We will probably be in the studio around March.

AL: What other tour plans are in place for the remainder of this year?
JH: We finish the Carnival of Madness tour on September 15th. In October we are starting in the Pacific North West and going through Canada and down the east coast making our way to Florida. In November and December we head over to Europe for some shows and we finish there at the Brixton Academy in London. We have a few shows after that but we have most of the holiday season off.