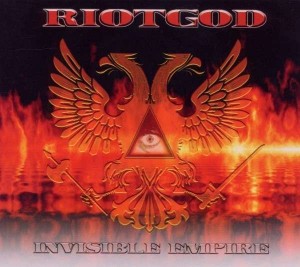 “Invisible Empire” is the 2nd studio album release by the Red Bank, NJ based band RiotGod. The bands line up consists of Garret Sweeney- guitar, Mark Sunshine- vocals and Monster Magnet members Bob Pantella- drums and Jim Baglino- bass. “Invisible Empire” is being released via Metalville Records and is the follow up release to the bands self titled album “RiotGod”

Being a fan of Monster Magnet back in my college days I was curious to hear what the rhythm section of the band had going on as of late. Though a touch different than what I was expecting “Invisible Empire” still was a fairly enjoyable listen. Vocalist Mark Sunshine has a Robert Plant type sound to his voice that gives these 12 tracks a modern Led Zeppelin sound. The track “Loosely Bound” was a personal favorite of mine as I really enjoyed the guitar playing and overall feel of the song. The 12 tracks contained on “Invisible Empire” may not have enough of the Monster Magnet sound for hardcore fans of the band however, those willing to explore something different will find a solid rock album.