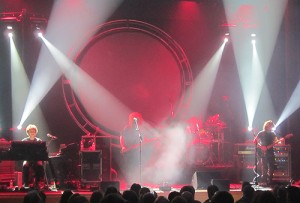 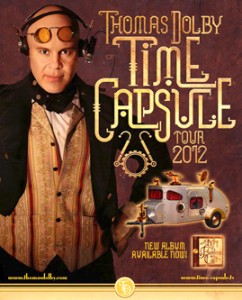 “I keep hearing about artists who have made a big comeback album after 2 years. Try two decades.”

Yes, indeed: it’s been 20 years since Thomas Dolby released his last disc comprised of original material, 1992’s “Astronauts & Heretics”. And it’s been 30 years since the release of his signature hit song, “She Blinded Me With Science”, in 1982.

None of the elapsed decades seemed to make any difference whatsoever at the Ridgefield Playhouse stop of Thomas’ appropriately-named “Time Capsule” tour, though. Throughout the entire show, Dolby more than adequately proved that his abilities as both a musician and a songwriter have not diminished one iota over the course of time that he’s been largely absent from the music scene. And he’s still one hell of a storyteller, both in terms of lyrics and between-song recollections and anecdotes that are full of his distinct British wit and accessible sophistication.

Even though Dolby may be dismissed by most as an 80’s one-hit-wonder, his musical catalog has always showcased a myriad of musical styles and influences – all of which he handles with a degree of mastery that makes each foray its own wonderful little aural journey. The cross-section of songs played in Ridgefield readily displayed this as Dolby bounced from quiet piano ballads (“Love is a Loaded Pistol”) to ethereal jazz crooning (“The Flat Earth”) and even some toe-tappin’ knee-slapping country bluegrass (“The Toad Lickers”).

Unlike his one-man “Sole Inhabitant” tour in 2006 in which he surrounded himself on three sides with an array of techogadgetry and delivered songs entirely synthesized, Dolby brought along a backing band this time around. Comprised of drummer Matt Hector and guitarist Kevin Armstrong (with occasional appearances by opening act bluegrass musicians Aaron Jonah Lewis and Ben Belcher), his musical entourage added the right level of instrumentation to Dolby’s songs – never overpowering the maestro’s keyboards but never slipping too far into the background as to become irrelevant.

The 110-minute, 16-song set concert touched upon all of five of his studio releases, including his most-recent release, “A Map of the Floating City”. There was even time for one mega-obscurity: 1986’s collaboration with Ryuichi Sakamoto, “Field Work”, a song that had never appeared on a Dolby album until the 2009 reissue of his debut disc, “The Golden Age of Wireless”. And, of course, a little bit of “Science” was thrown in for good measure.

It’s refreshing to have Dolby back on the scene performing music that’s every bit as powerful as it was decades ago as well as new material that easily matches the caliber of his earlier work. In a day and age that seems to produce so few virtuoso musicians, Dolby’s “Time Capsule” is a pill that, when taken, reminds us how rich and rewarding pop music can be when prescribed by someone as gifted as he genuinely is. One can only hope that Thomas doesn’t go on another multi-year sabbatical. I’m going to need a refill sooner than that.