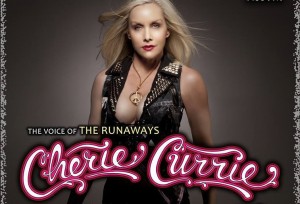 Cherie Currie got her start in the music business while still in her early teens fronting the iconic all girls group The Runaways. Though the group only lasted a short time Currie went on to become a successful solo performer and chainsaw artist. Cherie’s latest solo album titled “Reverie” is her first in 35 year’s and features collaborations with former Runaways manager Kim Fowley and former Runaways guitarist Lita Ford. Media Mikes had the pleasure of speaking with Cherie recently about the albums creation, what it was like working with Kim and Lita again and her thoughts on a Runaways reunion.

Adam Lawton: What made now feel like the best time to for you to release a new solo album?
Cherie Currie: I started performing again in 2010 when The Runaways movie came out. I had the chance to open for Joan at the Pacific Amphitheater and I found it nice to not be covered in gas and oil for once as being a chainsaw artist for the last decade that happened quite often. (Laughs) The reception from that show was a great one and things just started rolling from there. I had Matt Sorum drumming for me and he also was the one who put the band together. We ended up going in and doing a record for Joan’s label Blackheart. Someday I hope for that record to see the light of day. From there I decided to put myself on the road without management as I just wanted to get out there and play. I did about 4 tours in the US and Canada. When that was over Kim Fowley reached out to me after hearing I might be interested in working with him again. I jumped at the chance to work with Kim again despite knowing he was very ill. The whole idea of letting go of that bad blood I had towards him as a kid and to be able to re-experience him as an adult was absolutely a treasure to me. Getting to have my son be a part of this process was also really great. The experience was just amazing.

AL: Besides working with Kim on this project you also worked with Lita Ford. How did that opportunity come together?
CC: Lita and I had become friends for the first time in our lives actually about three years ago. She had asked me to do a duet with her a couple years ago titled “Rock This Christmas Down”. I actually flew in mid tour to do this session. The single turned out great and after Kim reached out to me to do this album I called Lita and asked if she would be a part of it. Lita had hurt her hand prior to the session so she wasn’t able to play guitar however she did sing on a couple tracks. It was a lot of fun to be able to work with her again.

AL: What was it like working with both Kim and Lita now as compared to when you were in The Runaways?
CC: When you are 15 years old, never sang in a studio before and you have this tall man towering over you and yelling things can be a bit tense. It was a totally different experience this time. I have always thought about those times but now being a parent myself I can understand where Kim was coming from a little better. Kim didn’t have a great childhood so it’s hard to imagine him in his 30’s knowing what to do with 5 teenage girls. He did the best he could. Years ago he and I spent hours on the phone burying the hatchet. He apologized to me but he also knew that we were going out in to this big bad world and that we needed tuff skin. He did things in the only way he knew how. I look back now and wish I had the brain then that I have now but I just didn’t. I think I would have laughed a lot more than cried. Kim was just such a character which he was up until the day he passed away.

AL: Is the material that makes up this album stuff that you have been working on for some time or is it newly written material?
CC: “Inner You”, “I’m Happy”, “Dark World” and “Queens of the Asphalt Jungle” were all written in one afternoon at Kim’s apartment. Two days later we were in the studio and shortly after that Kim became so ill that he couldn’t continue. Kim turned the record over to my son Jake and he and I started writing together. The track “Believe” is one I wrote about 19 years ago. I am really happy that we recorded that song as it has just been sitting around. “Shades of Me” I wrote with Jake and it’s a duet which Jake sort of went into kicking and screaming. He was bit unsure about doing a duet with his mother. (Laughs) He ended up sounding so good that I told him to just keep singing. The two Runaways songs were ones that I had been performinglive. I used my band to record those along with Lita. The song “Reverie” was a song that was originally done 3 years ago for a film. That never ended up happening and we used that song as we felt it was a cool tune. We really rushed to get this album done before Kim passed but we ended up just shy.

AL: Describe the working/creative relationship like between you and your son?
CC: We have done 4 tours together now and while out on the road we are roommates. We have spent a lot of time together both on the road and on stage. Since he was 13 I have always drug him along with me. His very first radio show was Jonesy’s Jukebox. There was my son playing guitar with Steve Jones of the Sex Pistols. I knew then he had something and was very talented but I had no clue he would go on to be as good as he is. He is such an amazing writer, producer and musician.

AL: Have you set up any plans to tour in support of the release?
CC: Eventually. I am going to be picking up the chainsaw again. I had to put it down to make this record and I have quite a bit of work for clients along with another pretty substantial carving that needs to be completed. I am going to focus just on the chainsaw for a few months and then I will be putting the band back together and see what happens.

AL: With all the recent collaboration amongst former Runaway band members are there any talks of all of you getting together for a project?
CC: I always did and it was something I always wanted to believe would happen but I don’t think that anymore. I was the last one standing again saying that this thing was going to happen but I just can’t anymore. I am always the optimist but it just doesn’t seem to be something Lita or Joan are interested in doing. For years I was always the one telling people not to give up but sometimes you just have to admit it and walk on. From there you can move on with your life. I can’t miss out on things in my life because I am constantly wishing for the band to get back together. I just really had to let it go. I have been blessed recently in that I have got to work individually with Joan, Kim and Lita. I am very happy with that.