Media Mikes has teamed up with their friends at Amazon Originals to give (50) readers and a guest the chance to be among the first to see the new film “The Report,” starring Adam Driver and Annette Bening.

The film will screen on Tuesday, November 12th at the Screenland Armour Theatre in North Kansas City. The show begins at 7:00 pm

If you’d like to attend, all you have to do is click HERE. If you do not have an Amazon Screenings account you will have to create one. The first (50) readers to do so will receive a pass for (2) to attend the screening. This is a first come/first serve giveaway. Once the allotted passes have been claimed the giveaway has ended. Enjoy the show!

NO PURCHASE NECESSARY.  Limit one (1), up to an admit-two pass per person, while supplies last.  A limited number of admit-two passes are available per code and once all passes are redeemed, the code will be invalid.  This film is rated R for some scenes of inhumane treatment and torture, and language.  Must be 17 years of age or older to receive pass.  Seating is available on a first-come, first served basis.  Employees of all promotional partners and their agencies are not eligible.  Void where prohibited.  SEATING IS LIMITED, SO ARRIVE EARLY.  PASS DOES NOT GUARANTEE A SEAT AT THE SCREENING.  Refer to screening pass for further restrictions. 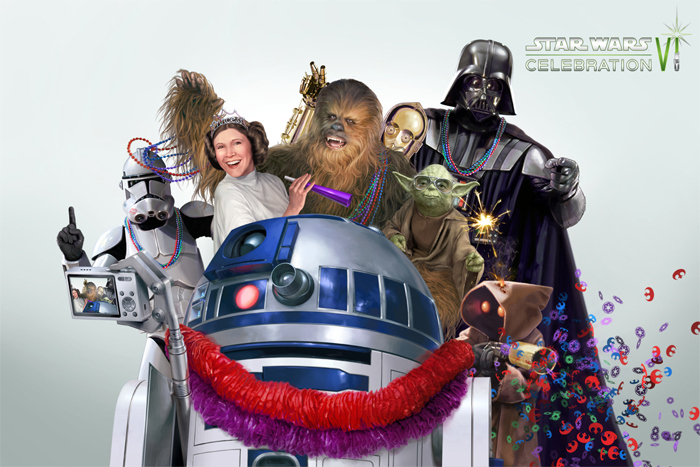 When I was asked to cover “Star Wars Celebration VI”, I was nervous but also very excited.  I have been a “Star Wars” fan from before I could walk.  Now with a daughter of my own, I am able to introduce her to these same films.  When I arrived at the event early Friday morning, we were instantly surrounded by many fans dressed as Storm Troopers and Slave Leia’s (not all were women…yikes!).  Since we missed the events of Thursday, we immediately ran to the Celebration merchandise booth.  We were very disappointed to find that most of the official Celebration shirts were sold out before Friday even started.  I think that was very poor planning since at $30 a pop and three more days to day they could have made A LOT more money.  We all know that “Star Wars” fans have very deep pockets.  After getting some merchandise it was off to the main hall to check for cool vendors and hit up some panels.

The main hall was jam packed with great vendors, including Hallmark, LEGO and Disney…just to name a few.  These had the longest lines just to even get near due to selling exclusive merchandise.   There were also various  “Star Wars” sets and photo ops available to fans…and for FREE!!  I have attended many horror conventions and nothing is free.  This was a real treat for us “Star Wars” fans. The highlight for me was the life-size Rancor named Roxi, thanks to the 501st Legion.  There was also live tattooing going on, which was very tempting for me to finally get my Imperial logo tattoo (but I couldn’t get the nerve).  Next up, we went over to the autograph hall to catch a glimpse of our favorite talent from the films.  Signing at the event was  Mark Hamill, Carrie Fischer, Anthony Daniels, Ian McDiarmid and Warwick Davis.  Personally, I immediately sought out the line for Tim Rose or better known as Admiral Akbar.  Let me tell you this guy had a constant steady line ALL weekend non-stop.  I guess people didn’t know that it was a trap (HAHA, sorry).

Throughout the weekend, we attended some really interesting and fun panels.  One of my favorites was the “Super Secret Star Wars Panel!” with Todd Grimes, Seth Green and Matt Senreich.  They gave us an exclusive first look at their top secret animated “Star Wars” project, now we know is called “Detours”.  This is a new computer animated television series, which is going to take “Star Wars” into a whole new world of possibilities.  It is mashin up the “Star Wars” universe and bringing back all of our favorite characters and putting them in a social setting when their is no war going on.  It is a super cool idea and going to be airing in 2013, which is definitely not soon enough.  Check out the trailer here:

We also had the really cool opportunity to attend an invitation only press conference for “Star Wars: The Clone Wars”.  The talent attending were Ashley Eckstein, Dave Filoni, Dee Bradley Baker, Joel Aron, Matt Lanter and Sam Witwer.  It was a very informative panel and the cast was just having a blast chatting about what we can expect from season 5.  Besides the press conference, we had the chance to interview Matt Lanter, voice of Anakin Skywalker on “Star Wars: Clone Wars” one-on-one.  He is one of the nicest guys and just so humble.  We were lucky enough to chat with Anthony Daniels, who played C3PO in the series.  Mr. Daniels was nice enough to chat with us one-on-one about his role in the series.  Both these interviews will be posted the first week of September…so check back!

The highlight of the show had to be “The Clone Wars: Season Five Premiere”. The energy in the room was just so extraordinary and the show has never looked better. It is easily going to be the best season yet. Speaking of “Clone Wars”, if you were able to catch the panel on Saturday then you had the chance to see and hear the creator of “Star Wars” George Lucas stop in for a chat.  This had to be the total dream for all fans of the series.  I had the chance to catch a glimpse of Mr. Lucas walking around the main hall before opening on Saturday morning and it was such a thrill.  Another very cool panel was The Future of “Star Wars 3D”, which gave a sneak peak into what we can expect from “Star Wars: Episode II – Attack of the Clones”.  This panel also provided us with super cool exclusive collectible 3D glasses.  If you attended the closing ceremony, they announced there that they are bringing both “Star Wars: Episode II – Attack of the Clones” and “Star Wars: Episode III -Revenge of the Sith” to theaters back-to-back in the Fall of 2013. What an announcement!

Overall the event was a blast and I hope to attend this event again in the near future.  Though it is doubtful to be next year since Celebration will be returning to Europe comes 2013, but I say share the “Star Wars” love.  I would like to thank everyone at Lucas Film & ReedPop for allowing us a chance to cover this amazing event.  “Star Wars” fans are very devoted people and the people behind “Star Wars Celebration VI” really appreciate that and delivered a very impressive event.