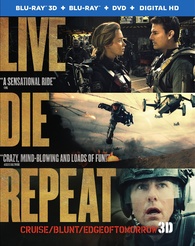 When I watched the trailer for “Edge of Tomorrow” immediately I was hooked. I mean “Alien crossed with Groundhog Day”…sign me up! Let me tell you though, the trailer does no justice at all for the film. “Edge of Tomorrow” is in fact, my favorite film of the year so far. It is very underrated and deserves much more attention. “Transformers: Age of Extinction” is a decent movie and it made a billion dollars, so obviously quality doesn’t win in terms of success. Tom Cruise is completely badass, as is Emily Blunt who was outstanding. The visual effects are the best I have seen all year and the film is not only NON-STOP (that’s right all in caps) but also funny as all hell! This is a must see movie and I highly recommend it.

Official Premise: The epic action of Edge of Tomorrow unfolds in a near future in which an alien race has hit the Earth in an unrelenting assault, unbeatable by any military unit in the world. Major William Cage (Cruise) is an officer who has never seen a day of combat when he is unceremoniously dropped into what amounts to a suicide mission. Killed within minutes, Cage now finds himself inexplicably thrown into a time loop, forcing him to live out the same brutal combat over and over, fighting and dying again and again… and again. But with each battle, Cage is able to engage the adversaries with increasing skill, alongside Special Forces warrior Rita Vrataski (Blunt). As Cage and Rita take the fight to the aliens, each repeated encounter gets them one step closer to defeating the enemy.

Warner Bros is releasing this film under a new title to hopefully drum up some new business  “Live. Die. Repeat: Edge of Tomorrow”. They are bringing this together in a combo pack with a Blu-ray 3D + Blu-ray + DVD + UltraViolet digital copy.  The 3D is some of the best and most relevant that I have seen in theaters in a long time. It is well placed and adds tons of depth and even a few good scares in the film. On Blu-ray, it translates just as well. The 1080p transfers is simply outstanding. The film feels like a live-action video game in many scenes. The DTS-HD Master Audio 7.1 is also mind-blowning. I love the score to this film and it really is represented well with the crazy amount of action.

The special features are good but I would have loved to had an audio commentary track as well. “Storming the Beach” features director/producer Doug Liman taking us behind- the-scenes featurette for the film. Along with this feature is a three-minute alternate Adrenaline cut of one of the “Operation Downfall” sequences. “Weapons of the Future” features cast and crew talking about weapons. “Creatures Not of This World talks about creating the film’s aliens and their story.  “On the Edge with Doug Liman” is a fantastic nearly 45 minutes in-depth documentary on the production. Lastly there are seven deleted scenes included.