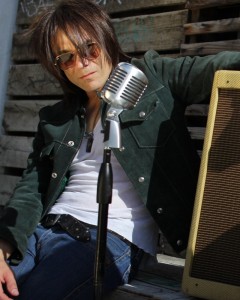 The retro-rock act known as The Raskins, are currently out on the road as part of Motley Crue’s final tour which also features veteran rocker Alice Cooper. The band consisting of twin brothers Logan and Roger Raskin perform a unique blend of rock that harkens back to the early days of CBGB’s but with a modern twist. Media Mikes spoke with Logan Raskin recently about the group’s formation, their debut album and how they landed one of the biggest tours of the summer.

Adam Lawton: Can you give us some background on the band and what made you want t pursue music?
Logan Raskin: Both my brother and I were born in raised in Chelsea, NY and our parents were in the music industry for many years. My father did lots of shows on Broadway and was the lead in shows like “West Side Story”, “Oklahoma” and bunch of others. I grew up going to those shows and watching him perform. He also would take a band with him out on the road and perform various songs from shows he appeared in and my brother and I would go out on the road with him. My mother was a pretty well known jazz singer around New York and also put a couple albums out as well. They taught us how to play music at a very young age and I think my brother and I wrote our first songs between the ages of 8 and 10. It was sort of inevitable that we would end up in the music business. Granted our parents taught us music our mother never really wanted us going in to the music business because the lifestyle was sort of tough for them and she didn’t want us to go through the same thing. Growing up on the Lower East side however music was tough to get away from. On any given night we could go to a club and see The Ramones, Patty Smith or The New York Dolls. We got bit by the bug and it was pretty much game over. We are very happy to be able to be doing music now full time.

AL: Have you and your brother always played together in bands?
LR: People always assume that we have played together our whole lives but to be honest this is the first time that we have really been in a band together. We certainly have played together over the years but never in a band. The Raskins have been together for about 3 years and it was something that started out as just a writing project. Roger and I had been composing music for television and movies for years and that’s what we were in to. We started getting a lot of fan mail from around the world from people who heard some of our work and really enjoyed it. They were always asking about where they could get our music and when they could see us live. We took about a year and recorded this first record on our own. We initially went in and recorded 60 songs. From there we took the best 12 that we thought represented us well and we put them on this record.  Next we put the band together and worked the New York area pretty heavily before making our way out to Los Angeles. We pushed the internet market really heavily as well and that’s where things really started for us.

AL: Did you have a clear cut vision of how you wanted the band to sound when you were first starting out or did your sound evolve more naturally?
LR: It was a combination of both. When we went in to the writing stage we wanted to just write as much as we could. We had an overwhelming amount of music written when we went in to do tracking and things just went from there. Our influences certainly came out and Roger and I both had a lot inside us. We wrote these songs for us as over the previous seven years we were composing music for other people. We had the opportunity to do this for ourselves and we were like kids in a candy store. The reason we did the recording of the album ourselves was that we didn’t want to have to work within a specific time frame as we both knew each other had a lot to say. What you get on the album are the influences we got from our parents along with what we were exposed to musically growing up in New York.

AL: When you are writing material do you and your brother generally work separately or collaboratively?
LR: It’s a combination of the two. We have a main studio that we work out of but we also have our own little separate studios at home. We both write music and lyrics but for this album I think I wrote more of lyrics. A lot of stuff we do completely on our own but it’s great to work together and bounce ideas off one another. Roger has given so many great songs. We work really well together. Sure we battle it out sometimes as we do a lot of hours in the studio but we have a process we go through that works well for us. We don’t try to force anything. We just try to be ourselves.

AL: What was it like taking your two piece band and developing it into a full group for touring purposes?
LR: We went through several ideas in our heads. Have both been in and out of bands over the years it’s a tough process. People sort of see us as this overnight success because all of a sudden we are out on the road with this big tour. That’s certainly not the case. We have been doing this for quite some time. We love everything about music and have had our share of struggles along the way but to have this opportunity to start off as a duo with my brother and then build a great band around us we feel that the bond of the band is extremely tight. We are surrounded by some really great musicians and even though people may see us as a duo we are a band. My brother and I felt that being in this band together with other musicians would just strengthen our bond.

AL: Can you tell us about being out on the road with Alice Cooper and Motley Crue?
LR: It has been an incredible year for us so far. When we finished the album we wanted to tour as much as possible and to really get the music out there any way we could. We started out doing a winter tour on our own and after that run ended we were asked to be a part of the Scott Wieland tour. We went out with Scott for about a month and while that was happening we were in talks for summer touring options. A few ideas were mentioned and being an optimist I mentioned some of the bigger tours going on this summer like Slash and Miles Kennedy, Kiss and Def Leppard, and Motley Crue and Alice Cooper. About 5 shows in to the run with Scott we got a call asking just how serious we were about the Motley Crue tour. We were serious as a heart attack and our booking agent thought we had a shot so we went for it. After a couple weeks we still hadn’t heard anything. We had initially submitted only for 17 shows so we weren’t sure what was going on. We ended up re-submitting for the entire tour and shortly thereafter we got a calling saying there was interest in having us. We had to wait for the guys in Motley Crue to make the final decision and luck for us they loved us and we were asked to be on for all 66 U.S. shows. It’s great being out here playing all these great venues that we always dreamed about. We played the Hollywood Bowl recently and will be playing Madison Square Garden also this year. As two kids growing up in New York City that is just going to be a dream come true.

AL: What are the bands plans after this tour run ends?
LR: We want to try and take a little time at the end of November to do some recording as we are always writing. We want to get what we have down in to demo form. Right now it likes like we will be out with HIM for 10 shows in December and we are also looking at some dates with Joan Jett, Blondie and The Cult. That will take us into next year with the possibility of going out with the Red Hot Chili Peppers and maybe AC/DC. I told them to put that at the top of the priority list! (Laughs) My dad always told us to shoot for the stars and maybe you will reach a tree top. That our philosophy with everything that we do. This year has been great so far and we are excited about the future.