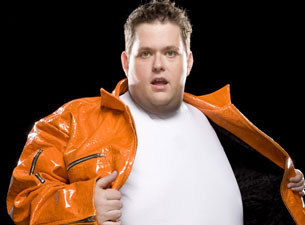 Ralphie May is a comedian, who recently released his special “Too Big to Ignore” on DVD. Ralphie is constantly touring and took out some time to chat with Media Mikes  about the new special.

Mike Gencarelli: Do you feel your latest DVD “Too Big to Ignore” differs in any way from your previous releases?
Ralphie May: Yes. I think the content of the material is a lot deeper. I think it’s the best stuff I have ever done. It shows me as a family man, a thinker and a motivational speaker. It’s very raw and there are a lot of elements to it. It’s big.

MG: How long does it take you to prepare for each show?
RM: It takes me about 2 years to get 2 hrs. of solid material. Most comedians in 2 yrs. Might get 30-40 minutes of material and I get 2 hrs.

MG: Are you afraid to touch on any certain subjects?
RM: I don’t think so. If I have I just haven’t gotten to that subject yet.

MG: What do you enjoy talking about most when you are on stage?
RM: My babies. I like talking about my kids because I get to relive those moments which are true stories.

MG: Did you feel restricted in any way with your Comedy Central special?
RM: Of course. There were some restrictions. There were accommodations for image to sell me in other ways. I work within those boundaries and try to respect them. I want to help them by making the product as good as I can.

MG: Do you feel DVD live shows are the future of comedy?
RM: Audio albums are definitely out. You can get the audio via iTunes but then most people are watching it on their iPhone’s or iPad’s.

MG: What do you like most about touring?
RM: I don’t. It’s work now that I have children. People think they pay for the jokes well they don’t. They pay for me not being at home. The jokes are on the house. I will tell them to anybody. 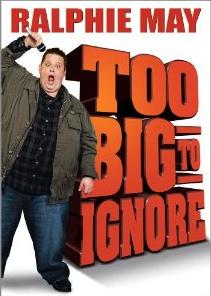 I am new to the comedian Ralphie May, but boy I am super glad I was introduced. He is one funny son-bitch, dirty as hell, but super funny. In “Too Big to Ignore”, which is his record breaking fourth Comedy Central Special, he leaves no stone unturned. The special is also an amazing 108 minutes, which is extremely long for comedy act. What I also liked was that it was uncut and raw. If you haven’t heard of Ralphie May, this is a must to check out. You will not be disappointed.

He seriously covers everything and nothing is safe including politics, race, religion and of course his family. I think I almost fell out of my car when Ralphie paused for a minute, looked around laughing and said “I wish they are just jokes”, while telling a story about his family. This guy is constantly touring and if you can get a chance to catch this guy don’t miss it. I will be attending the show myself when he heads around to Flordia. He even jokes about that he looks exactly like Chaz Bono, aka Cher’s daughter/son. I couldn’t look at his the same way. What a riot!

The only extra included on this is a brief five minute look behind-the-scenes featurette. Even though only five minutes it is pretty entertaining. I would have like to seen any extended scenes if possible but I doubt this show actually had any. If you are looking for a good time and some great laughs, this DVD will not disappoint at all. Also now, I am officially a life-long fan of Ralphie May.