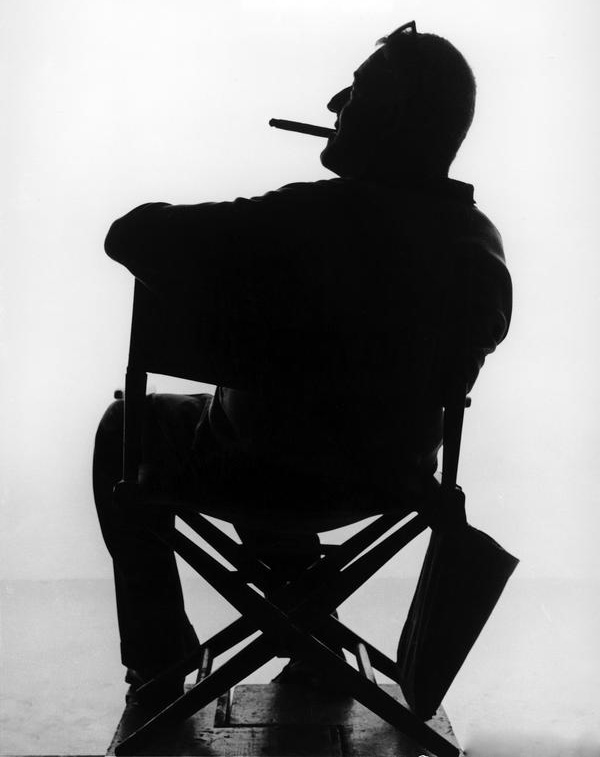 It’s no secret that movies are influential.  From snappy catch phrases – “I’ll be back!” – to fashion (think Diane Keaton in “Annie Hall”), they have an important part in our lives.  Heck, you’re reading this on a website that was created by two people who share a love of the film “Jaws.”  No “Jaws”…no Media Mikes! Recently, researchers at the University of Turin in Italy conducted a study of over 47,000 films to see which had the biggest influence on its audiences.   Their list was based, in part, on how many times a film has been referenced in other films, as well as how many spin-offs it expired.

Surprisingly (to me anyway), the study determined that the most influential film of all time is 1939’s “The Wizard of Oz,”.which has been referenced over 3,000 times in other films and television programs.  Most of those references were either the use of the Oscar-winning song, “Over the Rainbow,” or the inclusion of Dorothy’s famous line, “I have a feeling we’re not in Kansas anymore.”  The film has also inspired several other films, including “The Wiz” (1978) and “Return to Oz” (1985).

Here, according to the study, are the (20) most influential films of all time:

If you have a film that has influenced you in some way, please let us know below. 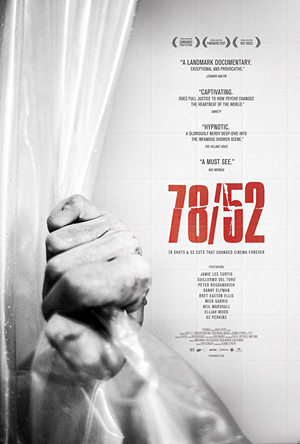 It is one of the greatest scenes in movie history. Like the crane shot showing the carnage of the Civil War in “Gone with the Wind” or the Odessa Steps sequence in “The Battleship Potemkin” (later copied by Brian De Palma in “The Untouchables”), whenever you think about Alfred Hitchcock’s classic film “Psycho” the first thing you think of is the shower scene. The new film “78/52,” which references the number of pieces of film (78) and edits (52) that comprise the scene, takes a look at the creation of the scene as well as its impact on Hollywood and world cinema.

Despite the use of plenty of footage from “Psycho,” the film begins with a recreation of a scene featuring Marion Crane’s car driving thought the rain. What is disconcerting about this footage is that the woman featured bears a very close resemblance to Adrien Brody in a blonde wig. Thankfully we soon return to the film being discussed and take a painstaking journey of 90 minutes to dissect a scene that only lasts three.

General fans of the film will be impressed with all of the “behind the scenes” interviews with everyone from Mali Renfro, who played Janet Leigh’s double during the shoot to Jamie Lee Curtis, Leigh’s daughter. Also included are fans like Elijah Wood, Danny Elfman and Bret Easton Ellis. Film buffs will also enjoy the comments of filmmakers great (Guillermo del Toro, Martin Scorcese) and, well, not so great (Eli Roth) as they explain how the film helped shape some of their own work.

A seemingly unending number of industry insiders (editors, writers, etc) offer their own takes on the meaning of the scene, going so far as to dissect it nearly frame by frame. In between the comments are some great moments, including the actual storyboards Hitchcock had Saul Bass design for the scene as well as the still-to-this-day argument about whether or not we actually ever see the knife penetrate the body.

If you’re a fan of “Psycho” and want a good “behind the scenes” look at the film, I’d recommend the brilliant documentary put together by the great Laurent Bouzereau that can be found on the DVD release of “Psycho.” But if you’re REALLY keen to learn the in-depth story, you should give “78/52” a look. 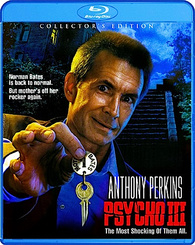 You would think by the time you made it to the second sequel of Alfred Hitchcock’s masterpiece “Psycho” that it would be past its prime but that is not the case here.  Anthony Perkins returns yet again in his iconic role, in fact he also directs the film as well. He is joins by Jeff Fahey, who I have always loved from this film. The film takes place one month after the events of “Psycho II” and is very clever and an all around fun ride. Despite that the film became the lowest grossing film in the “Psycho” franchise, though it was still followed by the TV movie, “Psycho IV: The Beginning”. If you are a fan of this franchise or horror in general, Scream Factory has done it again, delivering another great release.

Official Premise: The Bates Motel is once again the site of something evil as the rehabilitated Norman attempts to help a disturbed young woman, Maureen Coyle (Diana Scarwid, Mommie Dearest), who has left the convent because she can’t find any proof that God exists. Maureen bears a striking resemblance to one-time Bates Motel guest Marion Crane (Janet Leigh) which puts Norman on edge. At the same time, a nosy reporter is snooping around town looking into Norman’s past. Suspense, terror and black comedy worthy of the master himself are in hearty supply in the most shocking Psycho of them all!

Like “Psycho II”, Scream Factory really delivered a fantastic release for this film. The Blu-ray’s 1080p transfer with an aspect ratio of 1.84:1 is very impressive and despite some grain looks great overall. Same goes for the audio tracks, like “Psycho II” this film also contains both DTS-HD Master Audio 2.0 aiming to showcase the film’s original sound design and a supped up DTS-HD Master Audio 5.1 track. Carter Burwell took over the duty for the score from Jerry Goldsmith and does a solid job and it sounds great here, no questions.

The special features included some great new extras and just like “Psycho II” are worthy of this collector’s edition as well. To kick them off there is an audio commentary with writer Charles Edward Pogue and hosted by Red Shirt Productions’ Michael Felsher, must listen for any fan of the series.”Watch the Guitar: An Interview with Jeff Fahey” is a great new feature with the actor reflecting on his role. “Patsy’s Last Night: An Interview with Katt Shea” talks about working on her role and working with Anthony Perkins. “Mother’s Maker: An Interview with Special Make-Up Effects Creator Michael Westmore” talks about the effects in the film. “Body Double with Brinke Stevens” talks about her work on the film. Lastly there are trailers and still gallery included. 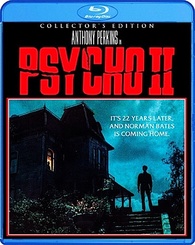 How do you follow up an amazing classic film like Alfred Hitchcock’s “Psycho”? Well for first bring back Anthony Perkins as Norman Bates. Second bring in hot newbie writer Tom Holland (Fright Night) to set a killer (no pun intended…well maybe some) script. While this film does not reach the reaches of the first “Psycho” but it is a damn awesome sequel. The film is set 22 years after the events of the first “Psycho” and packs a great cast, besdies Perkins, including Vera Miles, Robert Loggia, Meg Tilly and Dennis Franz.  The film always struck me as being very clever and still holds up today. A must have for any horrorhound.

Official Premise: Psycho II is the terrifying sequel to one of the most suspenseful films of all time, Alfred Hitchock’s Psycho. Anthony Perkins makes a horrific homecoming in his role as the infamous Norman Bates, who, after years of treatment at a mental institution for the criminally insane, still can’t quite elude the demands of “Mother.” Vera Miles also returns a the inquisitive woman who is haunted by her sister’s brutal murder and the ominous motel where it all occurred.

Scream Factory really gave a lot of love to “Psycho II” as it has never looked better.  The Blu-ray’s 1080p transfer with an aspect ratio of 1.84:1 is very sharp and quite impressive. There is a little bit of grain showing but overall, it is a great high-definition transfer. In terms of audio tracks “Psycho II” contains both DTS-HD Master Audio 2.0 aiming to showcase the film’s original sound design and a supped up DTS-HD Master Audio 5.1 track. I have to admit, I enjoyed both but the 5.1 track really worked the best for me with Jerry Goldsmith’s score.

The special features are worthy of this collector’s edition as well.  There are vintage cast and crew interviews, which runs just over 30 minutes. There is a option to play the film with cast and crew interviews (audio only), which are different from the ones above. This is a pretty cool feature for hardcore fans. There is a brand new audio commentary track with Tom Holland and is hosted by Rob Galluzzo (writer-producer-director of “The Psycho Legacy”). Great addition to this release and a must listen for any fan of the film. Holland really kicks some ass here. Lastly there are some trailers, TV spots and a still gallery included.