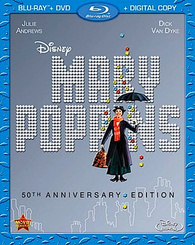 “Supercalifragilisticexpialidocious!” I am not joking, I must say that word at least once a month and in fact I used it in a sentence earlier today before even receiving this Blu-ray to review! “Mary Poppins” is such an amazing film and I can’t believe that it is celebrating its 50th Anniversary.  This is the first time that this film has ever been released on Blu-ray and it was definitely has never looked better. I never released that “Mary Poppins” was Julie Andrews’ film debut. The film won five Oscars (Best Actress: Julie Andrews, Best Original Score, Best Song: Chim Chim Cher-ee, Best Editing, and Best Special Visual Effects) and has alaways been one of my favorites. Thinking about the film today and having an 18-month old daughter, this film is definitely a tougher sell for today’s generation, especially due to its nearly 2 hour and 20 minute running time. Nonetheless, it is a classic and is no question a must have for any Disney fan!

Official Premise: Releasing from the Disney Vault, creative visionary Walt Disney’s classic shines for the first time on Blu-ray. Starring Dick Van Dyke and Julie Andrews in her Academy-Award winning role, and featuring iconic toe-tapping songs including “A Spoonful of Sugar” and “Supercalifragilisticexpialidocious,” Mary Poppins is a movie experience your family will enjoy again and again. An all-new digital restoration adds even more magic, helping bring the award-winning songs and amazing picture to life like never before. Share the music, share the magic, share the joy of Mary Poppins this holiday.

Disney definitely took into account that this was celebrating its 50th Anniversary and delivered a very solid Blu-ray release for “Mary Poppins” with a combo pack including a Blu-ray + DVD + Digital Copy. I am very excited that Disney has jumped on the Ultraviolet bandwagon for their Digital Copies because this is going to get quite a bit of use. The film has received an all-new digital restoration on its 108op transfer and really looks stunning, especially with the half animation/live action scenes. The colors are muted a little but still really pop and look crisp. I am love with the classic line detail on the animation as well. I was also quite impressed that this 50 year old title was equipped with a very high def DTS-HD Master Audio 7.1 surround track. The film’s timeless songs are really showcased quite well within this track and like the film itself have never sounded better.

The special features are quite impressive as well and definitely a good draw in with some new content included. The star of the show is no question, “Becoming Mr. Sherman”, which also plugs Disney’s new film “Saving Mr. Banks”. It features actor Jason Schwartzman, who portrays half of the famous composing team, the Sherman Brothers, in the new film, sitting down with Richard Sherman. It is a great feature on the films amazing music and also gives us a sneak peak into “Saving Mr. Banks”. The other all-new feature is a “Mary-Oke Sing-Along”, which is a fun and I expect to use this a lot as I introduce my daughter to the film over the years. Next up there is “A Magical Musical Reunion with Julie Andrews, Dick Van Dyke and Richard Sherman”, this is a must watch for any fan of the film! It is great to see the trio reunited for this and reminiscing about the film. “Supercalifragilisticexpialidocious: The Making of Mary Poppins” is a featurette going behind-the-scenes on the production. Lastly there is also a deleted song called “Chimpanzoo” included. 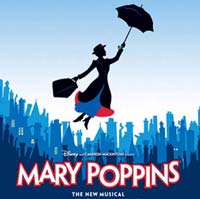 The wind picked up on the mid-west plains last week, and that magical, singing, cleaning nanny we all learned to love growing up was blown right into Kansas City. Mary Poppins delivered one of the most colorful and musically brilliant shows I can ever remember seeing. Led by the outstanding performances of Madeline Trumble as Mary Poppins and Con O’shea-Creal as Burt, the jack of all trades famously played by Dick Van Dyke on the big screen. This Broadway worthy performance had me captivated and taken right into early 1900’s London. Fantastic acting by all players, great use of accents when speaking and singing and phenomenal dance numbers are among the highlights of this production.

“Mary Poppins” was a film that most everyone has seen and hopefully remembers quite well. I was relieved that the play did not run word for word, scene for scene as the movie; for if it did it would have been a bit boring, as anything would be if you knew what to expect the whole time. There are some familiar songs featured in the film but not included in the production such as ” I Love to Laugh.” But the addition of some originally cut songs such as “Practically Perfect” made me completely forget all about that. You can’t top the great Dick Van Dyke’s performance in the film, but in this production Con O’shea-Creal was dead on in character. He had such a great presence on the stage that he actually stood out to me more than the title character. He had the audience laughing, clapping along and received great ovations after most of his numbers.

This play had one thing that I have never made notice of before at a live theatre event. The scene changes that happened the whole night and the colors! The brilliance of the lights and the colors made me wish I would have brought my sunglasses into the theater especially during the carnival with the ever so popular and classic song “Supercalifragilisticexpialidocious.” The staging made me drop my jaw and say WOW!! Something I would never expect, or have experienced, at live theater. Every scene change happened flawlessly and so quick you didn’t even notice. Trust me I think that is as weird as you do reading this to make note of something like that. That was just another reason that I felt that this show was outstanding in every way. You could say it was “Practically Perfect”.

I would advise anyone that lives near a city that this show is coming too to get out and find a seat in the theatre. If you have kids great. If not, “Mary Poppins” is still a show that you will not regret seeing.