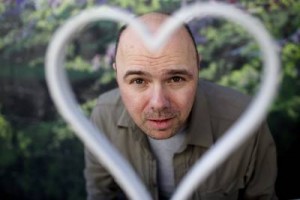 Karl Pilkington is known best for his work with Ricky Gervais and Stephen Merchant. He has worked on shows like “An Idiot Abroad” and “Derek”. His latest show “The Moaning of Life” has him traveling yet again all over the world on a journey of self-discovery. The new series premieres on The Science Channel on Saturday Jan 18 at 10pm EST. Media Mikes had a chance to chat with Karl about his new show and what we can expect.

Mike Gencarelli: After the second season of “An Idiot Abroad”, you said “no more traveling” then you came back for a short (no pun intended, sorry Warwick) third season and now you are off on adventures again with “The Moaning of Life”; what was the driving force for this new series?
Karl Pilkington: I suppose the fact that I had turned forty and have not gone the route a lot of people normally go by this point in their lives. Most people are married with kids by my age but I’ve never fancied. People have said to me ‘Oh you’re going to regret not having kids’ but then what if I did have one and then regret it. There’s always two sides isn’t there. They say ‘it’s life changing’, but so is losing a leg. So I traveled the world to see how other countries treat these big decisions in life. The other reason I did it is I have to pay my bills and it’s a way of making money.

MG: Some of the topics you cover are “Marriage”, “Happiness”, “Kids”, “Vocation and Money” and “Death”; which of these were the most eye-opening or life changing experience for you?
KP: They all had there moments but the death episode was mad. It’s probably the most interesting thing I’ve ever done and will never forget. I had never been to a funeral so the one I went to in Ghana was to be my first. I ended up getting really involved and helped make up a woman called Comfort. I also visited a cemetery in Manila where the bodies are given a grave for five years. After that five years the lease needs to be extended, if the family don’t wish to pay the money or don’t have it to extend the lease the body has to be removed to make way for a new dead body. I walked around the cemetery like a traffic warden inspecting the dates before finding one that had to be moved. I helped chisel away at a tomb and popped the remains in a bag that would then be passed onto family.

MG: How has it been working with The Science Channel for the second time now after “An Idiot Abroad”?
KP: They’re okay. I got some good chocolates from them for Christmas. Massive it was. Like a bargain bucket from KFC full of chocolates.

MG: What was your biggest challenge that you experienced during this series in “The Moaning of Life”?
In the episode about “Happiness” I met with the Raramuri in Mexico who are a tribe who can run long distances and get happiness from it. Some have been known to run for 48 hours. I ran about 25 miles. I ended up winning a goat for my effort which I thought was a nice gift until it kept me awake all night bleating outside my tent. I set it free the next day as I think I’d have had problems taking it home. it’s not something you could class as hand luggage is it.

MG: Was it relieving to travel without being told what to do by Ricky and Stephen?
KP: Yeah it was a lot different. I enjoyed my travels a lot more. I stayed in hotels that had their own toilet this time. Proper luxury.

MG: After the events in the Philippines last year, did it make you reflect differently on your time spent there?
KP: No. A bad situation is bad no matter if you’ve visited it or not. Most places I’ve visited have had some kind of natural disaster at some point.

MG: Tell us about how the show translates into your latest book “The Moaning of Life: The Worldly Wisdom of Karl Pilkington”?
KP: The book is the hardest thing I do, but it’s the thing I’m always most proud of. It’s a chance to empty all my thoughts of my travels which there isn’t always time for in the TV program. I go away for around nine days and what happens is then crammed into forty five minutes. I suppose the TV program is like a postcard where there is little space to tell the full story, so lot’s of things happen that the viewer doesn’t get to hear about so it all goes in the book.

MG: Is a second series in the cards for “The Moaning of Life”; if not what do you have planned next?
KP: I want to spend some time at home. I haven’t had time to unpack properly yet. A few jobs on the house need doing. I need to repaint the chimney and a few window frames so that will keep me busy for a while. Let’s see if people enjoy watching it, if they don’t there will be no more. There’s another good thing about not having kids, there’s less pressure on earning money.