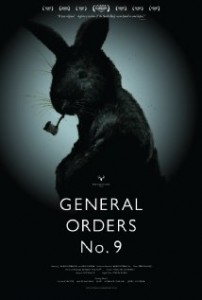 I am a sucker for cool poster art. I usually get easily draw or turned off by a film’s poster or box art. “General Orders No. 9” was one of those examples, with its pipe-smoking rabbit. I was shocked to find out that it was in fact a documentary about deals with the progress of change happening American South. Doesn’t sound interesting to you? Well it is definitely not for everyone. This is a very interesting unique film and if you are a fan of documentary and amazing cinematography then check out “General Orders No. 9” for sure.

If you have seen the work of Terrence Malick, especially “The Tree of Life”, I couldn’t help but think that some of this footage was from that movie. It seems like something that would have come out of Malick’s head. The film is a unique display of experimental filmmaking that has spanned over eleven years’ work from first time writer-director Bob Persons. This is a film about the changing landscape of the American South and focuses on nature and man’s progress. It is told entirely with images, poetry, and music throughout.

“General Orders No. 9” is definitely a unique film and quite a visual journey of the South’s landscapes. It is subtle and simplistic, yet while sending across a very important message. The film is currently available to own using iTunes for a reasonable $9.99. Like I said this is not for everyone, but you are open for an experimental documentary on the landscapes of the South then this will be for you.

Disney Junior has ordered a third season of “Jake and the Never Land Pirates,” its #1 series and cable TV’s #1 series among Boys 2-5, bringing the episode tally to 100 thus far, it was announced today by Nancy Kanter, Senior Vice President, Original Programming and General Manager, Disney Junior Worldwide. The series revolves around a crew of kid pirates – leader Jake and pals Izzy and Cubby – and follows their Never Land adventures as they work to outwit two infamous characters, the one and only Captain Hook and Mister Smee, from Disney’s classic “Peter Pan.” The stories emphasize teamwork and features original pirate rock music performed by Sharky and Bones of The Never Land Pirate Band.

Kanter said, “The series is connecting with kids on every level and brings them closer to characters they’re already familiar with and introduces them to new, original characters they have made their friends.” She continued, “The storytelling is adventurous and heartfelt and embeds the kind of learning that we know is important to parents. We’re pleased to be extending viewers’ experience with the stories, allowing them to play the ‘Jake and the Never Land Pirates’ experience.”

The memorable Disney stories and characters, both classic and contemporary, have connected strongly with kids age 2-7 and their parents, and that connection has also led to the creation of brand extensions in other Disney businesses. “Jake and the Never Land Pirates” is a prominent part of the popular Disney Junior Live on Stage! attraction at Disney Parks & Resorts, and is featured in a Disney Junior magazine from Disney Publishing, in a soundtrack and DVD from Disney Studios and a Disney Consumer Products line set to debut in stores nationwide in spring 2012. Included are multiple product categories: party supplies, apparel (sleepwear, daywear), room décor and plush. An exciting toy line releasing in June and showcased this week at American International Toy Fair, will feature plush, role play and accessories from Just Play and action-oriented play sets and figures from Fisher-Price, including Jake’s Pirate Ship, designed after Bucky, Jake’s ship in the series.

The series airs daily during Disney Channel’s Disney Junior programming block for kids age 2-7 and will have a major presence on the new 24-hour Disney Junior channel launching in the U.S. on Friday, March 23. The series stars Cameron Boyce as Jake; Madison Pettis as Izzy; Jonathan Morgan Heit as Cubby; David Arquette as Skully; Corey Burton as Captain Hook; Jeff Bennett as Mister Smee and Bones and Loren Hoskins as Sharky. Many of the key creative professionals behind Disney Junior’s Emmy-nominated series, “Mickey Mouse Clubhouse,” are behind “Jake and the Never Land Pirates” including executive producer Rob LaDuca, producer/story editor Mark Seidenberg and director Howy Parkins. The series is produced by Disney Television Animation.

Disney Junior reflects the emotional connection generations of consumers have to Disney storytelling and Disney characters, both classic and contemporary. It invites mom and dad to join their child in the Disney experience of magical, musical and heartfelt stories and characters, while incorporating specific learning and development themes designed for kids age 2-7. Disney Junior’s animated and live action series blend Disney’s unparalleled storytelling and characters kids love deeply with learning, including early math, language skills, healthy eating and lifestyles, and social skills. Disney Junior launched in February 2011 with a daily programming block on Disney Channel. In its first year, Disney Junior posted the network’s biggest yearly audience in the daypart in Total Viewers, Kids 2-5, Boys 2-5 and Women 18-49 and increased by double-digit margins among preschooler demographics over year-ago levels. On March 23, 2012 Disney Junior will add a basic cable and satellite channel in the U.S.