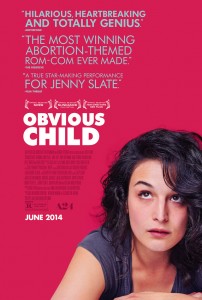 Even though this film only runs 90 minutes, it made me want three hours of my life back. I really wanted to like this movie; sadly I did not.

The film has somehow earned the label “an Abortion Comedy,” something I find offensive as the film is not funny at all. My not finding humor in the film has nothing to do with the subject matter. I just felt the jokes were lame and that there was no originality to the story. It followed all of the same tropes we see in generic New York-based romantic attempt-at-comedies. There is the quirky but lovable comedienne, her gay buddy, and her more world-wise best-friend. Nothing unique about this story at all; except for the subject of abortion. The film’s stance is that abortion is okay and that there should be no stigmas attached to the subject. Which, in my only comment on the subject, I agree with.

Lead actress Jenny Slate hasn’t been around for too long. In fact, I only know her from “Alvin & the Chipmunks: Chipwrecked” and don’t know of much else she has been in. While she was fine and amusing in the Chipmunks flick, I found her completely unappealing and unattractive in this role I’m commenting here on just her personality only; my comments have nothing to do with her physical attributes. I just didn’t like Donna Stern, the character she plays. She isn’t as clever or witty as she thinks she is, and I felt no sympathy for her character. She has recently broken up with her boyfriend and begins to react like so many other woman in the same situation do in movies like this: she gets drunk, leaves rude voice-mails (always followed by apologetic voice-mails), drinks some more and then hooks up with a stranger. The result of which is pregnancy.

Donna is losing her job, has no health insurance, no income, no savings, and now is pregnant. And, apparently in movie-land, pregnancy equals the end of the world. Donna spends the middle part of the movie moping around feeling sorry for herself, and sipping on wine with her friends. Instead of looking for a new job and trying to get her life back on track (pregnancy or not) she just complains, and uses her life for comedic material, which again is sad as none of it made me laugh. I will admit many people in the audience around me found it extremely funny, but all I wanted to do was see the credits roll so I could leave. About thirty minutes into the movie I was already checked out and knew I was in for another excruciating hour when David Cross’ character showed up. I was rejuvenated. I love David Cross. I’ve never not liked him in anything. Sadly, the film did the impossible: it became successful in making David Cross unfunny. His character was a sleaze-ball, which normally David Cross could play with his eyes closed. However, the character was unnecessary, and offered nothing but a minor plot twist, that only deviated the story for two scenes.

Altogether, I think the idea of what “Obvious Child” was wanting to bring to the screen was a good one; it just failed in its execution. Taking a serious subject and throwing a little humor at it is always a gamble but it is the lack of being funny that hurt this film. Instead of being a story that should have put a humanistic-yet-humorous spin on abortion as well as a statement for present-day women, this film did nothing but subject its audience to low-brow jokes about farting and peeing in public. I think instead of taking a step forward, this film takes a step back, and retreads ground we’ve seen too many times before. If it weren’t for the taboo subject of abortion this film would fall through the cracks and just be one of a hundred films of the same sort. 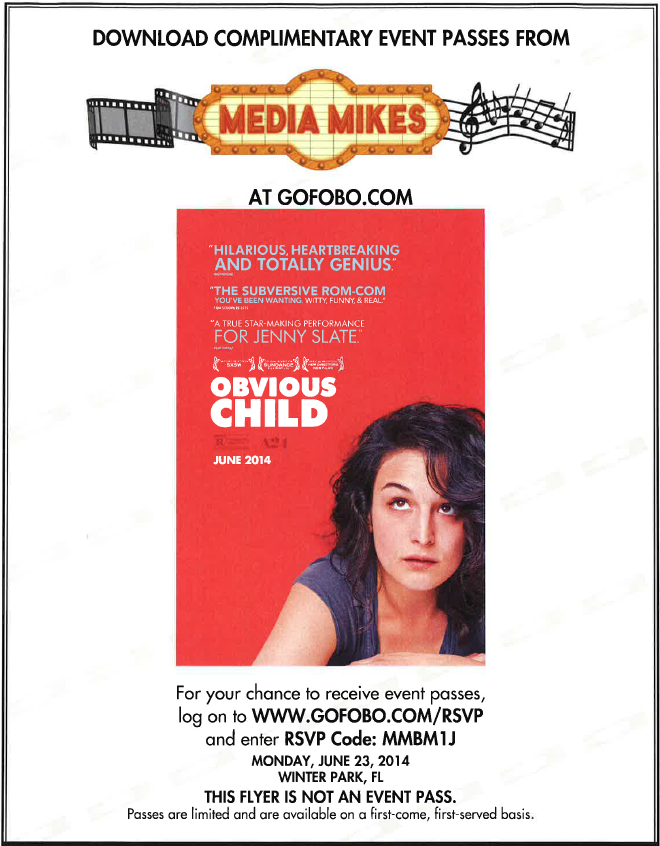 CLICK ON THE FLYER ABOVE TO VISIT GOFOBO.COM AND ENTER OUR CODE (ALL CAPS).

For aspiring comedian Donna Stern, everyday life as a female twenty-something provides ample material for her incredibly relatable brand of humor. On stage, Donna is unapologetically herself, joking about topics as intimate as her sex life and as crude as her day-old underwear. But when Donna gets dumped, loses her job, and finds herself pregnant just in time for Valentine’s Day, she has to navigate the murky waters of independent adulthood for the first time. As she grapples with an uncertain financial future, an unwanted pregnancy, and a surprising new suitor, Donna begins to discover that the most terrifying thing about adulthood isn’t facing it all on her own. It’s allowing herself to accept the support and love of others. And be truly vulnerable. Never failing to find the comedy and humanity in each awkward situation she encounters, Donna finds out along the way what it means to be as brave in life as she is on stage. Anchored by a breakout performance from Jenny Slate, OBVIOUS CHILD is a winning discovery, packed tight with raw, energetic comedy and moments of poignant human honesty. Writer/Director Gillian Robespierre handles the topic of Donna’s unwanted pregnancy with a refreshing matter-of-factness rarely seen onscreen. And with Donna, Slate and Robespierre have crafted a character for the ages – a female audiences will recognize, cheer for, and love.