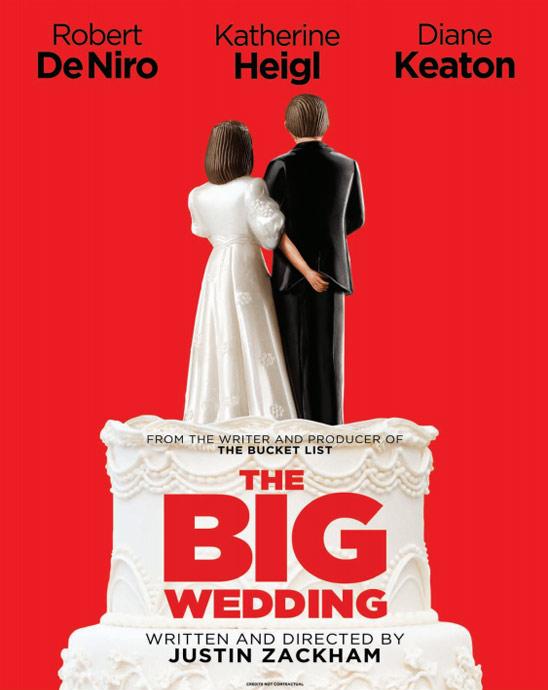 Santa Monica, CA, August 02, 2011– LIONSGATE® (NYSE: LGF), a leading global entertainment company, and Nu Image are thrilled to announce THE BIG WEDDING, a Nu Image / Millennium Films production that Lionsgate will be distributing in the U.S. and the U.K. The announcement was made jointly by Joe Drake, President of Lionsgate’s Motion Picture Group, Jason Constantine, Lionsgate’s President of Acquisitions and Co-Productions, and Avi Lerner, Founder and Co-Chairman of Nu Image, who is handling international sales of the film.

Written and directed by Justin Zackham (THE BUCKET LIST), the film centers around Don (De Niro) and Ellie (Keaton), a long divorced couple being forced to pretend that they are still happily married at their son’s wedding. Among all of their family and friends, the hoax snowballs into a poignant and raucously funny story about the ties that bind.

“THE BIG WEDDING is a charming, rollicking movie that promises to be an instant intergenerational family comedy classic,” explains Drake of the film’s appeal to the studio. “We are thrilled to be in business once again with Avi and Nu Image,” adds Constantine. “After our success together with action genre films like THE EXPENDABLES and the upcoming CONAN THE BARBARIAN, this film presented a wonderful opportunity to expand our collaborative horizons into the realm of broad comedy.”

“Our relationship with Lionsgate has always been mutually beneficial and one of great respect. A film like THE BIG WEDDING only reinforces that idea and takes our relationship to the next level,” says Lerner. “We know that Lionsgate’s faith in us to deliver on all of the potential of this comedy is well placed.”

Negotiations on behalf of Lionsgate were overseen by Constantine along with Lionsgate’s SVP of Acquisitions Eda Kowan and EVP of Business & Legal Affairs Wendy Jaffe.